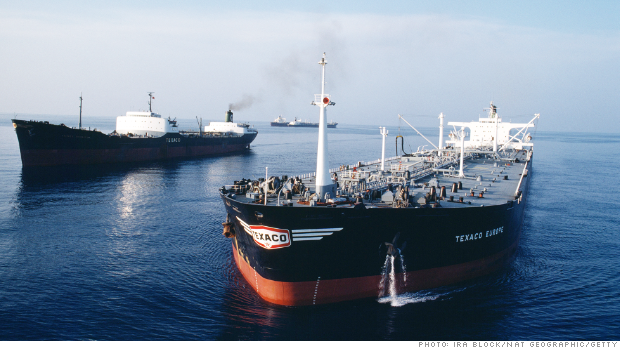 U.S. oil exports are set to surpass a record held since 1957 as traders find ways around a four-decade ban on supplies leaving the country.

The U.S. sent 401,000 barrels a day abroad in July, 54,000 shy of the record set in March 1957, according to data compiled by the Energy Information Administration, the Energy Department's statistical unit. While Canada accounted for 93 percent of the shipments, Italy, Singapore and Switzerland also took oil from U.S. ports. Coupled with Alaskan supplies bound for Asia, total U.S. exports will reach 1 million barrels a day by the middle of 2015, according to Citigroup Inc. (C)

Shipments abroad have quadrupled from a year ago as U.S. drillers pull record volumes of crude and natural gas out of shale formations across the middle of the country using hydraulic fracturing and horizontal drilling. Exemptions to a federal ban on crude exports allow for deliveries to Canada and permits some shipments from Alaska and California. The Commerce Department also issued rulings this year allowing processed condensate, an ultra-light crude, to be sent overseas.

"You have the condensates, some Alaska North Slope oil and the exports to Canada," Amrita Sen, chief oil analyst at Energy Aspects Ltd., a London-based research company, said by phone yesterday. "We can have record-high numbers by the end of the year."

ConocoPhillips is shipping a cargo of Alaska North Slope oil, or ANS, to Asia in the fourth quarter. The Polar Discovery, a 140,000-deadweight ton oil tanker, left the oil port of Valdez, Alaska, on Sept. 26 for Yeosu, South Korea, vessel-tracking data compiled by Bloomberg show.

"The Conoco cargo headed for South Korea marks the first sailing in what Citi expects to become an armada," Ed Morse, the head of commodities research at Citigroup, said in a research note yesterday. "Exports of ANS should reach sustainable levels of 100,000 barrels a day or more as more producers follow suit."

U.S. shipments to Canada will also rise when maintenance there ends, even as Enbridge Inc. (ENB) finishes the reversal of Line 9B that will carry 300,000 barrels of oil a day to eastern Canada from Ontario, Sen said.

"We are expecting U.S. exports to remain high even with the Line 9 reversal," Sen said. "Eastern Canadian refiners want the light, sweet crude, and the U.S. can give it to them."

North Atlantic Refining Ltd.'s 115,000-barrel-a-day Come by Chance refinery was scheduled to finish planned repairs this month, two people familiar with the work said Aug. 21, while asking not to be identified because the information isn't public.

"Most of the crude is basically going from the Gulf to the Atlantic, and that suggests that it's competing directly with Brent," Michael Lynch, president of Strategic Energy & Economic Research in Winchester, Massachusetts, said by telephone yesterday. "We're now at the point where you're probably going to see more Brent imports into Canada over the next month or two, which raises the question of where the U.S. crude goes."

The U.S. has banned most exports of unprocessed crude, based on a 1975 law passed after the Arab oil embargo sparked massive gasoline shortages and lines of cars outside stations.

Oil producers such as ConocoPhillips and billionaire Harold Hamm's Continental Resources Inc. (CLR), along with politicians including U.S. Senator Lisa Murkowski, R-Alaska, have argued that export restrictions no longer make sense in a world where the U.S. has boosted output by 65 percent in the past five years.

"I am encouraged to see Alaska increasing its participation in global oil markets," Murkowski said in a statement Sept. 29, referring to the export to South Korea. "It's my hope that Lower 48 oil will soon follow suit."

Exports rising to a record with restrictions in place show that existing exceptions are large enough to absorb the flood of production without any rule changes, which are unlikely in the current political climate anyway, said John Auers, vice president at Turner Mason & Co., an energy consultant.

"There is enough flexibility within the current law that we won't run into serious walls and we won't have any more real blowouts of margins," Auers said by phone from Dallas yesterday.

Two crude cargoes were booked on tankers from the U.S. Gulf Coast to Canada in the past week, versus one for the previous three weeks combined, according to ship fixture data compiled by Bloomberg.

"If we aren't already there, we'll probably be at record exports by the end of the year," Carl Larry, president of Oil Outlooks & Opinions LLC in Houston, said by phone yesterday. "We're finding ways to ship it out and the numbers keep growing. It's an inevitable thing."