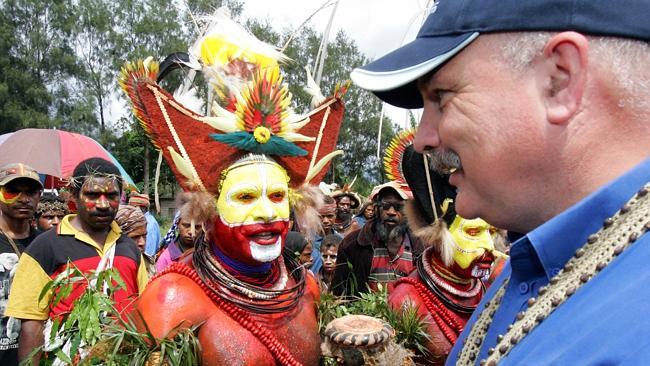 The year also resulted in new leadership at InterOil and agreement with Total S.A. of France to develop the multi-billion-dollar Elk-Antelope gas field in Papua New Guinea.

In March this year, InterOil also launched the start of a new US$300 million drilling program across four new petroleum prospecting licenses ("PPLs").

InterOil's Chief Executive, Dr. Michael Hession, said: "This past year was a milestone for InterOil. With new leadership and management, we moved quickly to bring greater stability to our operations in a way that would translate into improved performance and greater market confidence.

"Crucial to this was securing agreement with an oil major to develop on the Elk-Antelope gas field in Petroleum Retention License 15.

"In October 2013, the board approved InterOil's largest exploration and

appraisal program and one of the biggest in Papua New Guinea's history. We then accelerated preparation for exploration wells on our PPLs so we could drill as soon as we received the government approval.

"In March this year, approval was given and we successfully acquired the rights to the same acreage as we previously held, for the next six years.

"In March this year, we closed the sales and purchase agreement with Total S.A. of France to develop Elk-Antelope as a multi-billion-dollar LNG project for Papua New Guinea.

"These developments, together with our oil refinery and distribution businesses, position InterOil among the front rank of Asian energy companies.

The Right Team at the Right Time

"To deliver on this potential and realize the value of these assets, we have assembled an experienced, talented management team. In the final months of the year, new senior executives stepped into roles that they would formally assume early in 2014.

InterOil's growth and success depend heavily on the quality of this senior team to guide our exceptional staff and oversee our energy assets and I am confident that we now have the right team to realize InterOil's full potential.

"We also took significant steps to streamline our operations, bearing down on costs and rationalizing our offices and staffing. We announced the closure by the end of 2014 of our Cairns office, with the transfer of most functions to our office in Port Moresby. Though painful, it was important to align InterOil and ensure we focus our human and financial resources where they can have the greatest impact.

"These steps are integral to the strategy that I laid out on my appointment in July.

"This strategy has three horizons, detailing our vision to be a world-class

company developing world-class resources with world-class people who have a passion for working together, doing good work and making a difference.

"Horizon One is operating growth: running an efficient and financially stable business, with capital to support investment, low costs, strong skills and capacity, and streamlined processes.

"Horizon Three is future growth: investing in new exploration across frontier regions in Papua New Guinea and the region and being a partner or operator of choice for new ventures.

Cash in Hand to Pursue an Aggressive Drilling Program

"In short, we want to make the most of what we already have; turn probable opportunities into realities; and work our possibilities hard so they can become realities.

"This year, we took important steps towards each horizon. The business, at year's end, was stable, assets were being monetized, and we had scaled-up our exploration work.

"The receipt of $401 million as part of the completion of the Total agreement will leave us with a well-capitalized balance sheet to aggressively pursue our exploration program.