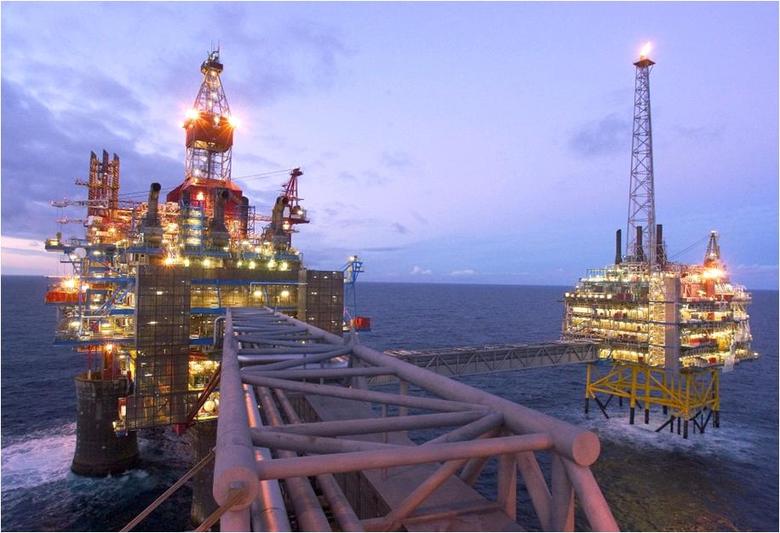 Oil majors are beginning to grow cool on new projects in Russia as U.S. and EU sanctions over Moscow's actions in Ukraine make investment increasingly risky and after the Kremlin's threat to review the West's role in Russia's energy industry, the world's largest.

"I don't think we will be jumping into new investments in the short term," Royal Dutch Shell's chief financial officer Simon Henry told a conference call on Wednesday.

The United States and the European Union imposed more sanctions on Russia this week as part of their drive to put pressure on Moscow for the annexation of Crimea and what they see as direct support for pro-Russian separatists that have seized public buildings across eastern Ukraine.

"It was planned a long time ago. I wouldn't read too much into the timing of the visit," said Henry.

BP's Chief Executive Bob Dudley also visited Moscow earlier this month and said the company was "rock solid" with its investment in the country, where it owns a fifth of the Kremlin's national oil champion Rosneft.

However, investors are increasingly worried about the Russian exposure of major oil companies. Rosneft chairman Igor Sechin, a close ally of Putin, was put on the sanctions list this week, but the company, along with state gas behemoth Gazprom and its executives, escaped sanctions for now.

Putin said on Tuesday that Moscow saw no need for counter sanctions but could reconsider the participation of Western companies in energy projects.

Richard Hunter, head of equities at Hargreaves Lansdown Stockbrokers, said exposure to Russia was among the main challenges for Shell's operations.

Both BP and Shell have a bumpy history of relations with the Kremlin. Shell owns 27.5 percent in Sakhalin-2, one of the world's largest liquefied natural gas projects, supplying Asia with super-cooled gas.

Gazprom owns 50 percent in the project, which it obtained in 2006 following months of pressure from state authorities on Shell over cost overruns and environmental compliance.

Shell denied any violations but had to cede control over the $22 billion project, Russia's biggest single foreign investment at the time, in a move analysts described as one of the biggest examples of the Kremlin's resource nationalism.

Those investment are dwarfed by those of BP.

"BP has a greater than average exposure to Russia, where it has close to 25 percent of its production base," analysts from Barclays said in a note.

BP ended up with 19.75 percent in Rosneft after the Kremlin-controlled company acquired BP's TNK-BP venture for $55 billion last year.

BP agreed to sell its TNK-BP share to Rosneft after a row with the Soviet-born TNK-BP shareholders during which Dudley was forced out as the head of the venture and fled Russia, saying he feared for his security.

This month, Dudley said BP could help enhance relations between Russia and the West.

"We are in close contact with political leaders in different parts of the world, and of course here in the UK," BP's chairman Carl-Henric Svanberg said this month when explaining what role BP could play to help sort the crisis.

The Kremlin has long relied on support from Western business leaders and some politicians to advocate its case in the West.

The pipeline helped Moscow raise its share of Europe's gas supply to 30 percent last year from 25 percent a few years ago.

A close ally of Schroeder, the former mayor of Hamburg, Henning Voscherau, is currently serving as chairman of South Stream, another massive Gazprom project involving France's EDF , Italy's Eni and Germany's BASF, which is due to deliver more Russian gas to southern Europe.

Total's chief Christophe de Margerie is expected to travel to Russia next month alongside Dudley and van Beurden for the country's main annual economic conference, the St. Petersburg Economic Forum, which Putin traditionally uses to lure new investments in the country.

Total relies heavily on Russia for future production growth as it has a 20 percent stake in Yamal LNG project, one of the largest LNG projects in the world, and also owns 17 percent in Russia's No.2 gas firm Novatek.

Novatek is co-owned by Gennady Timchenko, a businessmen targeted by Washington's Ukraine-related sanctions as a member of Putin's inner circle.

It is not clear if top executives from U.S. energy majors will travel to the St. Petersburg forum after the FT reported that U.S. banks Citigroup and Goldman Sachs were unlikely to send their chiefs to the gathering.

Of all the U.S. majors, ExxonMobil is most deeply involved in Russia as an operator in Sakhalin-1, one of three Russian production-sharing deals with foreign companies.

Oil production started in 2005, and amounts to around 150,000 barrels per day. The project has yet to unlock its full gas potential as Exxon has been unable to agree with Gazprom on gas deliveries and price.

Exxon, Eni and Statoil have also agreed with Sechin to develop the Russian Arctic shelf.

Russia needs Western technology to help it tap the Arctic as well as shale oil projects. Analysts say the start of production at these projects is 15-20 years away.

Other U.S. majors have smaller exposure to Russia.

ConocoPhillips sold out of its projects with private major Lukoil several years ago as part of its asset disposal programme.

Chevron never really built up a presence in Russia after a failed attempt to buy into Yukos, which was later nationalised by the Kremlin as part of its campaign to punish oligarch Mikhail Khodorkovsky for political activities.