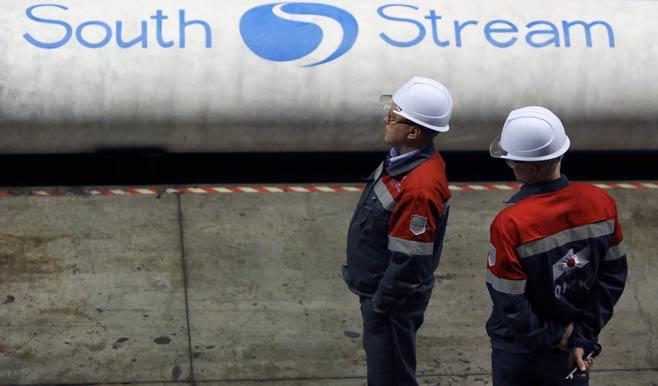 The EU's energy chief warned Moscow on Monday that the Ukraine crisis was hardening Brussels' stance on a gas pipeline that Russia's Gazprom is planning to build in southeast Europe.

Next month, construction is due to begin on the South Stream pipeline, which would run from the Black Sea to Austria. Gazprom has long sought to challenge EU competition rules to make the project more commercially appealing.

But in an interview with the Financial Times, Günther Oettinger, the EU's energy commissioner, said he was not inclined to waive the rules, particularly in light of events in Crimea and eastern Ukraine.

"These days, with Ukraine, we are more and more defensive related to Russian pipelines than one year ago," he said. "These days, exemptions are not my priority for Gazprom."

EU competition laws called "the third energy package" are intended to break monopolistic supply chains and would require Gazprom to grant other suppliers access to South Stream, possibly to a point where it could be restricted to providing only half of the pipeline's gas. The intention is to foster greater competition in EU energy markets.

Last week, Russia launched a complaint at the World Trade Organisation to try to overturn the EU's rules but Mr Oettinger said Moscow would not be granted any leeway. "It is not realistic to expect that we change these rules in the next days or the next years," he said.

"No doubt there is a different culture. In Russia, the government and Gazprom, they prefer to dominate the whole chain from production upstream . . . to downstream power plants."

In an Interfax report about the opening of the WTO case, Maxim Medvedkov, chief trade negotiator at Russia's economic development ministry, was quoted saying "The third energy package creates a serious obstacle for ensuring stable supplies of Russian gas to the EU, including a threat to the construction of new . . . infrastructure, such as under the South Stream project".

Before Russia's annexation of Crimea in March, the EU had been close to agreeing exemptions to its rules for a separate pipeline that brings Gazprom gas to Germany. Vladimir Putin, Russia's president, even announced the deal prematurely and Russian officials said they hoped similar exemptions could be used as a model for South Stream's partners.

But Mr Oettinger – saying that he and his legal advisers were "relaxed" about the WTO case – admitted that any decisions about flexibility for Gazprom were now overshadowed by politics. He said he did not oppose the South Stream pipeline but wanted to ensure that it met internal EU market rules.

While the rigorous application of EU law is aggravating Russia and Gazprom, the company insists it will press on with South Stream and has this year signed more deals with its German, Italian, Austrian and Swiss partners to join the project.

Analysts have noted that banks could be deterred from lending to South Stream because of the regulatory battle with Brussels. But they also believe that Mr Putin would probably still push on undaunted with a project whose cost has been estimated at €15bn-€16bn. Ilian Vassilev, an energy consultant and former Bulgarian ambassador to Moscow, said Mr Putin was "completely dedicated" and added that the project could be "financed out of the state budget".

South Stream has divided European countries just as the EU's 28 member states are seeking to forge consensus for potential sanctions against Russia. Those countries with strong interests in its construction – Germany, Italy, Bulgaria, Hungary and Austria – are among the most wary about economic measures against Moscow.