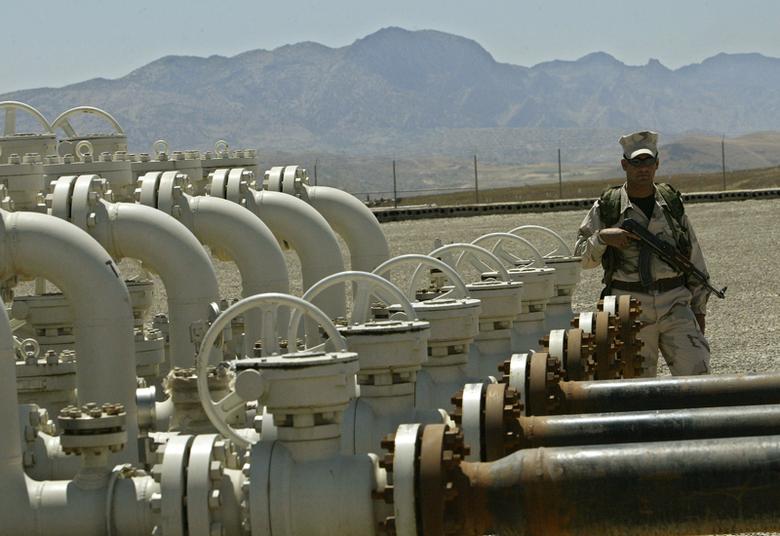 Unrest in Iraq comes as the almost total loss of Libyan supply, Western sanctions on Iran as well as conflict in Syria and northern Iraq are keeping almost 3 million barrels per day (bpd) - more than 3 percent of world demand - off the market.

More Saudi Arabian supply, and the U.S. shale oil boom, have helped plug gaps, but another crisis would deepen dependance on the Saudis, who are alone in holding significant amounts of unused production capacity.

Militants from the Islamic State in Iraq and the Levant overran the northern Iraqi city of Mosul in June, increasing concern of a disruption to exports from the second-largest OPEC producer. So far, Iraq's southern shipments are not affected.

"If we were to have another big outage, spare capacity would be really tested," said Olivier Jakob, oil analyst at Petromatrix. "The answer to a big disruption is going to come more from the SPR than from spare capacity."

The SPR, or the Strategic Petroleum Reserve of the United States and similar reserves held by other industrialised countries through their membership of the IEA, are consumer countries' last resort in case of supply outages.

Another big outage would also encourage the case in the West for relaxing strict monitoring of Iran's oil exports, stunted by sanctions over Tehran's nuclear prgram.

Strategic reserves were last tapped in 2011 during the Libyan conflict. China, not an IEA member and the second-largest oil consumer after the United States, also holds stocks.

"A major hit in or around Basrah would be very bullish in the short term for prices, and would likely lead to an IEA/SPR release," said a former government official involved in strategic reserves, now working for an oil company.

Iraqi officials say the southern oilfields that produce almost all of the country's exported oil are safe. OPEC Secretary General Abdullah al-Badri says the group is ready to pump extra oil if needed.

Of the 3.3 million bpd of spare capcity the IEA estimates is available, some 2.65 million bpd is in Saudi Arabia, the world's largest exporter.

A Saudi official last week reaffirmed the kingdom's willingness to make up shortages.

"Saudi Arabia has the capability to produce up to 12.5 million bpd when the customers ask for it," a Saudi official said. "The oil resources, production facilities and the management all support this."

But some in the industry question how sustainable the full 12.5 million bpd is. The kingdom has not been known to boost its production that far - output touched 10.1 million bpd in 2013, believed to be the record high.

"Saudi Arabia may very well be technically capable of supplying close to 12.5 million bpd, but probably only by drawing down stocks and thereby for a limited amount of time," said David Wech of JBC Energy.

As a result, readily available spare capacity may be less than the IEA's official estimates.

"Global spare capacity is 1.5 million bpd, overwhelmingly in Saudi Arabia, although for short periods of time we could draw on surge capacity of say another 1 million bpd," said a former IEA official. "People are surprisingly complacent, I think."

Apart from Saudi Arabia, supply could also increase in the short term should Western sanctions on Iran, in place over its nuclear program, be removed, analysts including Jakob said. But there is no sign of that happening yet.

It is therefore fortunate that Iraq's southern oil ouptut is unaffected so far. Brent oil has fallen to below $113 a barrel from the nine-month high of $115.71 it reached on June 19 as traders saw less of a risk of disruption.

"Should there be no meaningful disruptions to Iraq's oil production – as we expect – the Brent price should correct most of its recent increase," said Eugen Weinberg, analyst at Commerzbank in Frankfurt.

"Should there be any meaningful disruption, a price rise to at least $120 per barrel should be expected."