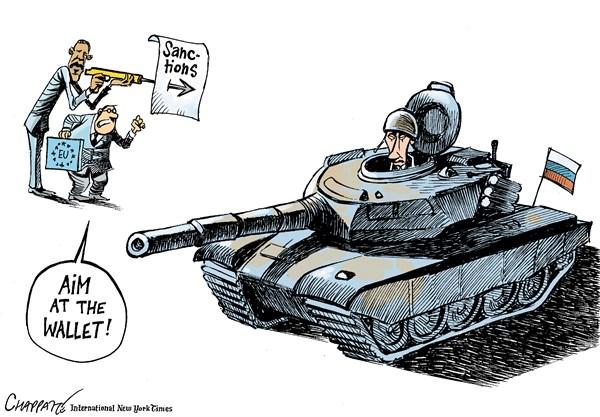 Companies across the eurozone warned that the crisis in Russia and Ukraine is already taking its toll on business, as stringent sanctions imposed on Moscow sent ripples through European boardrooms.

The warnings came as the European Union published its toughest sanctions against Russia since the end of the cold war, targeting Russia's energy, financial and defence sectors.

Shares in Adidas , the world's second-largest sportswear group, dropped 15 per cent after the company issued a profit warning and said it would accelerate the closure of stores in Russia because of increasing risks to consumer spending in the region. Volkswagen , Europe's biggest carmaker by sales, reported an 8 per cent decline in sales in Russia in the first half of the year, compared to the same period a year earlier.

Joe Kaeser, chief executive of Siemens , warned geopolitical tensions including those in Ukraine posed "serious risks" for Europe's growth this year and next.

Metro , the eurozone's second-largest retailer, said events in Russia were creating risks for the group as it revealed sales had declined sharply in Ukraine. The German group said that a planned listing of part of its Russian arm was on hold until the situation improved, citing uncertainty in the region and the fall in the value of the Russian rouble.

Royal Dutch Shell's chief executive Ben van Beurden said that along with other western oil majors he was assessing the impact of tightening sanctions on Russia's energy sector imposed by the US and EU. "It's a bit early to say how it will play out, what the consequences might be and how we will react," he said. The oil company last month suspended operations in the Yuzivska field of eastern Ukraine amid mounting clashes between separatist and government forces.

Erste Group , the third-largest lender in emerging Europe, warned the turmoil could impact banks in eastern Europe. "I can't exclude any nasty surprises in the region due to political decisions or developments," said Erste chief executive Andreas Treichl. "If the crisis accelerates of course we will have to revise our forecast for all over Europe in 2015 and 2016."

The German machinery association, VDMA, lowered its forecast for growth in the industry this year as it said the Russian situation was starting to affect bilateral trade and weigh on demand in important sales markets.

French oil major Total said on Wednesday it had frozen its purchases of shares in Russia's second-largest natural gas producer, Novatek, on the day that flight MH17 was shot down over Ukraine. BP , which owns a fifth of Russian energy company Rosneft, said earlier this week that its profits could be hit by the crisis.

US companies have also been affected. Visa and MasterCard are facing the prospect of tighter restrictions on the way international credit card companies can operate in the country as the government considers its own national payments system in response to earlier US sanctions.

Last week, Visa cut its fourth-quarter sales guidance, partially because of lower than expected cross-border transactions in Russia and Ukraine. Bank of America has almost halved its exposure to Russia this year to $3.9bn.

S&P Dow Jones Indices announced a reviewing of Russian securities in its indices, as some licensees may have to divest holdings of companies facing US or European sanctions.

ExxonMobil , which is developing a large liquefied natural gas export facility at Sakhalin in Russia's far east, said it was awaiting further details to understand the effect of sanctions designed in part to prevent the transfer of new technology to Russia's oil and gas industry.

David Rosenthal, vice-president of investor relations, declined to say whether the Sakhalin operation was financed through ExxonMobil resources already in Russia or was reliant on financing from outside. The distinction could make a difference to the company's ability to continue with the investment under the sanctions

In the City of London, bankers warned it was not feasible for Russian companies to list on the London Stock Exchange until a de-escalation of the crisis.

"Until there is some clarity and some sort of positive news that shows mutual understanding, I don't think any Russian companies will be able to come to market," said a Russian equity capital markets specialist at a major investment bank.