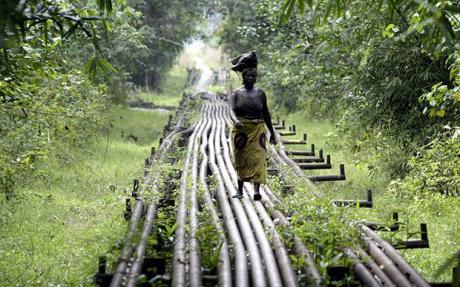 Surging oil production in Nigeria led output from the Organisation of Petroleum Exporting Countries (OPEC) to a one-year high in August, a Bloomberg survey showed.

Production by the 12-member OPEC rose by 891,000 barrels per day (bpd) to 31.033 million, according to the survey of oil companies, producers and analysts.

Last month's total was revised 80,000 bpd lower to 30.142 million because of changes to the Nigerian and Iranian estimates. Nigeria, Saudi Arabia and Angola led gains as new deposits came online, security improved and field maintenance programmes ended. Iran and Venezuela were the only members to record production declines this month.

Nigeria' production climbed 380,000 bpd to 2.3 million in August, the most since January 2006. It was the biggest one-month gain in data going back to 1989. Output is often disrupted by unrest in the Niger Delta, the country's main oil-producing region, leading companies to declare force majeure, a legal step that protects them from liability when they can't fulfill a contract for reasons beyond their control.

The Bonga project, which began producing oil and gas in 2005, was Nigeria's first deep-water development in water depths over 1,000 metres. Bonga North West represents a significant step forward for the project.

Oil from the Bonga North West sub-sea facilities is transported by a new undersea pipeline to the existing Bonga floating production, storage and offloading (FPSO) export facility. The Bonga FPSO has been upgraded to handle the additional oil flow from Bonga North West which, at peak production, is expected to contribute 40,000 barrels of oil equivalent per day, helping to maintain the facility's overall output.

Saudi Arabia, the group's biggest producer, bolstered output by 160,000 bpd to 9.98 million, the highest level since September, when the desert kingdom pumped 10 million.