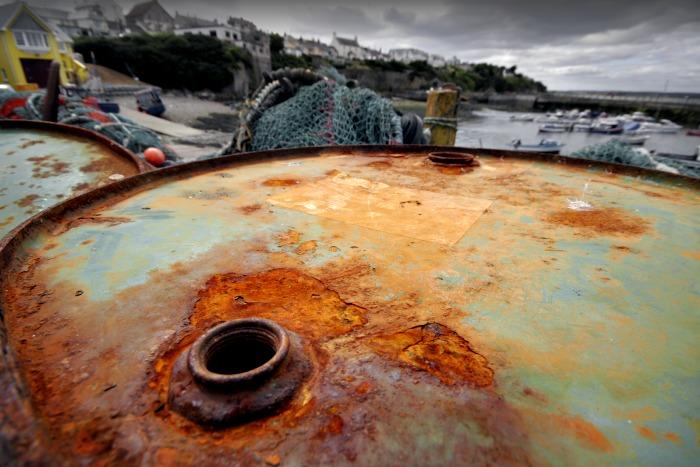 In a record downturn for the oil industry, cash is everything to companies and dividends are everything to their investors. One tool is helping Europe's three biggest producers preserve both, but there's a long-term price to pay.

Royal Dutch Shell Plc, Total SA and BP Plc will retain $8 billion a year in cash by giving investors the option of receiving payouts in shares instead, according to Jean-Pierre Dmirdjian, an analyst at Liberum Capital Ltd. That's equivalent to about 8.5 percent of total cash and equivalents currently on their books, making the so-called scrip dividend a vital tool as companies curb spending to ride out the slump in oil prices.

Oil companies' balance sheets are under pressure as investors expect them to keep paying dividends and spending to develop new resources even as earnings tumble. BP and Total didn't generate enough cash from operations in the first nine months of this year to cover these expenditures. While issuing new shares to investors eases the burden today, it also means future earnings will be spread more thinly.

"The scrip dividend is postponing the cash payout for the future in the hope oil prices recover," Alexandre Andlauer, a Paris-based oil sector analyst with AlphaValue SAS, said by phone. "While it preserves cash, for now, it dilutes earnings per share. When oil prices rise to $60, investors will start looking at more value through earnings per share rather than cash."

Shell, Europe's biggest company by market value, will save about $3.5 billion each year based on an average 30 percent of its dividend being accepted in shares, Dmirdjian said. That's equivalent to about 28 percent of the cash it earned from operations in the first six months on this year, according to data compiled by Bloomberg. Total will save $3 billion a year based on its second-quarter acceptance level and BP $1.5 billion, he said.

"The purpose of introducing the scrip was to give us flexibility," Shell Chief Financial Officer Simon Henry said Oct. 30. The cash saved annually is "equivalent to around a $10 movement in the oil price." Brent crude, the international benchmark, fell 3.9 percent to settle at $48.58 on the London-based ICE Futures Europe exchange Wednesday.

Shareholders have on an average taken up about 30 percent of Shell's dividend in shares since 2011, helping it save about $16 billion of cash, Henry said. BP's average has been 18 percent and it's savings has been $5.2 billion in the period, Liberum Capital wrote in a Sept. 15 report.

Without these savings, Shell would have had to borrow money to pay the dividend, taking its ratio of net debt to equity to 20 percent rather than the current 13 percent, according to the Liberum report. BP's would have increased to 23 percent from the current level of about 20 percent.

Shell Chief Executive Officer Ben Van Beurden and BP boss Bob Dudley have said maintaining dividend payouts is the top priority even as profits fall. Shell has gone through many downturns, including oil at less than $10 a barrel, and has not cut its dividend since at least World War II.

The plunge in these companies' share prices suggests some investors still doubt the dividend will be maintained. Shell's dividend yield -- the payout per share over the past 12 months divided by the share price -- was 6.9 percent Wednesday compared with an average 4.1 percent over the past two decades. BP's yield is 6.4 percent and Total's 5.2 percent.

The scrip dividend also means companies need to issue new equity, diluting their earnings per share. In the long run, it could force them either to allocate more cash for investor payouts or buy back their stock to prevent a reduction in dividends per share when scrip programs finally end.

"We've offset that dilution in the past with the buyback program," BP's Chief Financial Officer Brian Gilvary told analysts Oct. 27. "We are very cognizant of the fact that in offering a scrip which is taken up by our shareholders, that we need to think about the consequences of dilution."

Shell is likely to end the scrip dividend option in 2017, Henry said. Total will be able to halt its program the same year if oil trades for about $60, CFO Patrick De La Chevardiere said on a conference call Oct. 29.

For now, companies still prefer to protect their balance sheets rather than worry about lower earnings per share.

"Cash is the most important right now and Big Oil is doing what it can to preserve cash," Dmirdjian said. "It's working well for now."