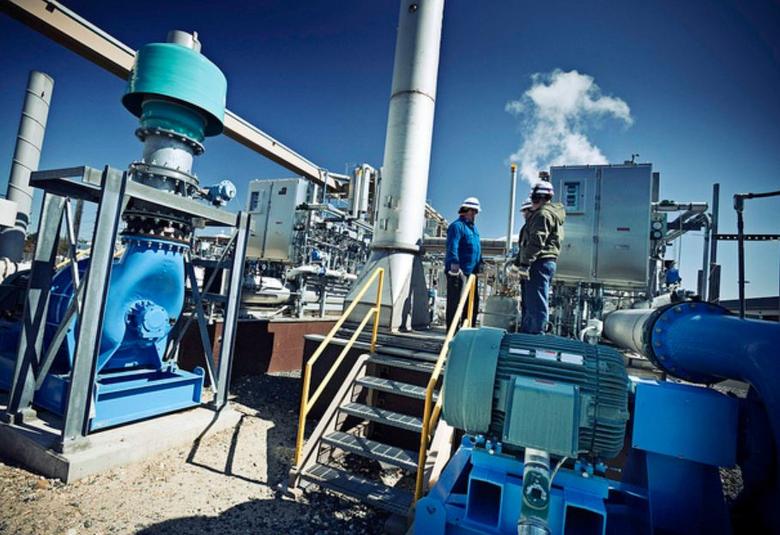 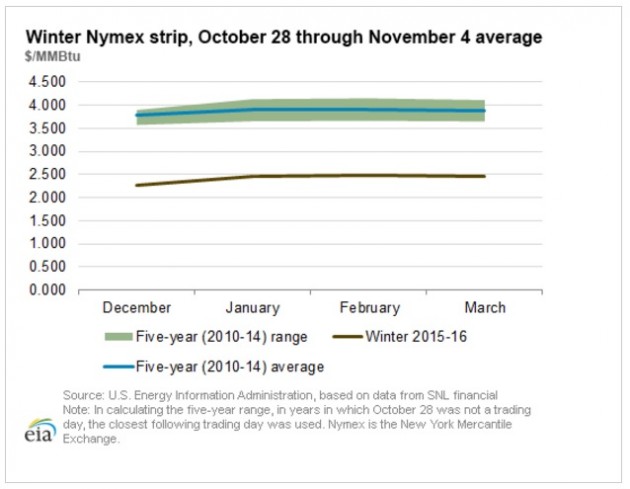 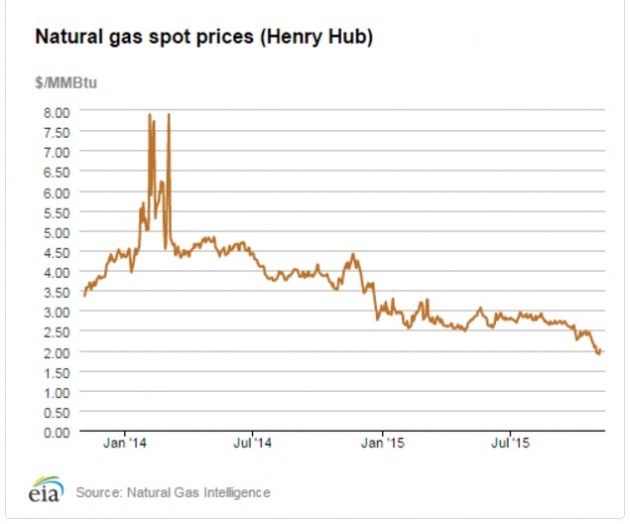 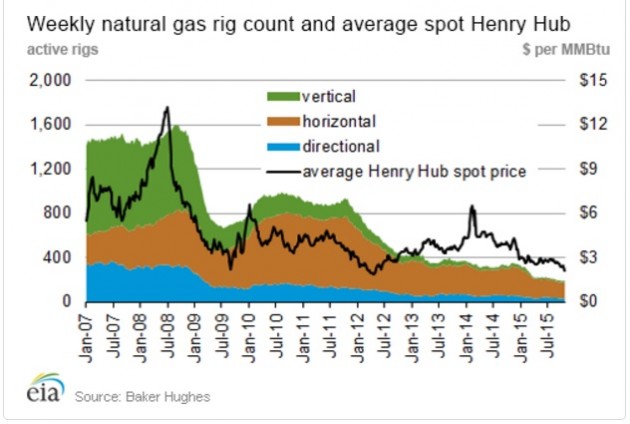 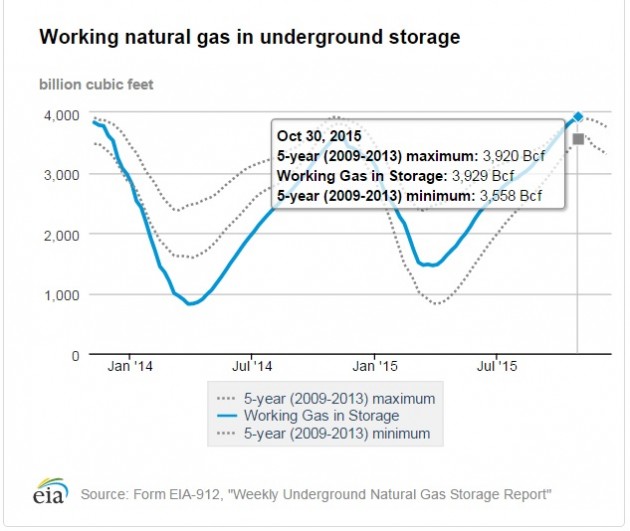 The winter natural gas futures strip, the four contracts from December 2015 through March 2016, averaged $2.419 per million British thermal units (MMBtu) over the report week (Wednesday, October 28, through Wednesday, November 4). This is nearly 40% lower than the five-year average, and one-third lower than the five-year minimum in trading on the New York Mercantile Exchange (Nymex). There are several factors driving these lower prices, including:

Record storage levels: After surpassing the five-year average on May 29, natural gas storage as of October 30 was 3,929 Bcf, matching the record level reported by EIA's Weekly Natural Gas Storage Report on November 2, 2012. Injections totaled 2,453 Bcf from April 3 to October 30, 15% larger than the five-year average, but 280 Bcf short of last year's record injection over the same time period.

Forecast for relatively warm weather: The U.S. Winter Outlook, released October 15 by the National Oceanic and Atmospheric Administration (NOAA), reflects an El Niño event, which will likely bring warmer-than-normal temperatures across the northern and western United States. Based on forecasts for warmer-than-normal temperatures, EIA's Winter Fuels Outlook, released October 6, forecasts a 6% decline in residential natural gas consumption this winter. With nearly half of all U.S. households heating with natural gas, residential consumption, the sector most responsive to winter temperatures, represents over 25% of the total natural gas consumption over November 2015 through March 2016. Total U.S. consumption is forecast to average 90 Bcf/d over that time period.

Natural gas spot prices fall. Henry Hub spot prices dropped to three-year lows this report week, settling below the $2/MMBtu threshold on trading days Friday, Monday, and Tuesday. At the end of the report week, Henry Hub prices increased to offset some of its losses, settling at $2.02/MMBtu for a net loss of 8cent over the report week. Prices posted declines in trading at most points in the United States. At the Chicago Citygate, prices posted a decline from $2.44/MMBtu last Wednesday to $2.19/MMBtu yesterday. Like the Henry Hub spot price, the Chicago price fell below $2/MMBtu midweek before increasing at the end of the week. Year-over-year growth in production, strong storage levels, and mild temperatures are the factors driving the low-price environment.

Marcellus prices down. Prices at trading locations in the Marcellus Shale declined this week, with prices at many locations settling at less than $1/MMBtu. At Tennessee's Zone 4 Marcellus trading point, prices began the week at $1.04/MMBtu last Wednesday and ended the week at 76¢/MMBtu. On Transco's Leidy Line, prices fell from $1.06/MMBtu to 87¢/MMBtu from Wednesday to Wednesday.

Supply declines. Supply declined week over week, with dry production falling 0.4% from the previous week. Imports of natural gas from Canada fell 10.4%, with the largest declines occurring in imports to the Midwest. Liquefied natural gas imports rose by 1.5%, but remained at very low levels.

Working gas stocks equal highest recorded levels. Despite the below-average weekly inventory build, working gas climbed to tie the record high of 3,929 Bcf reported for the week ending November 2, 2012. Working gas stocks appear poised to establish an all-time record high in next week's storage report if working gas stocks increase during the coming week, as typically occurs in early November. This year's high injections have been driven by builds in the Producing region, particularly in the Producing salt region, which had never been higher than 332 Bcf before this year. Both the salt and nonsalt Producing regions have established new all-time highs, 371 Bcf and 997 Bcf, respectively. Working gas stocks in both the East and West regions remain off the pace established in 2012.

Storage injections are smaller than market expectations. Market expectations, on average, called for a build of 58 Bcf for this week. When the EIA storage report was released at 10:30 a.m. on November 5, the December Nymex price rose about 2¢, to $2.33/MMBtu, and oscillated between $2.33 and $2.35/MMBtu in the following hour.