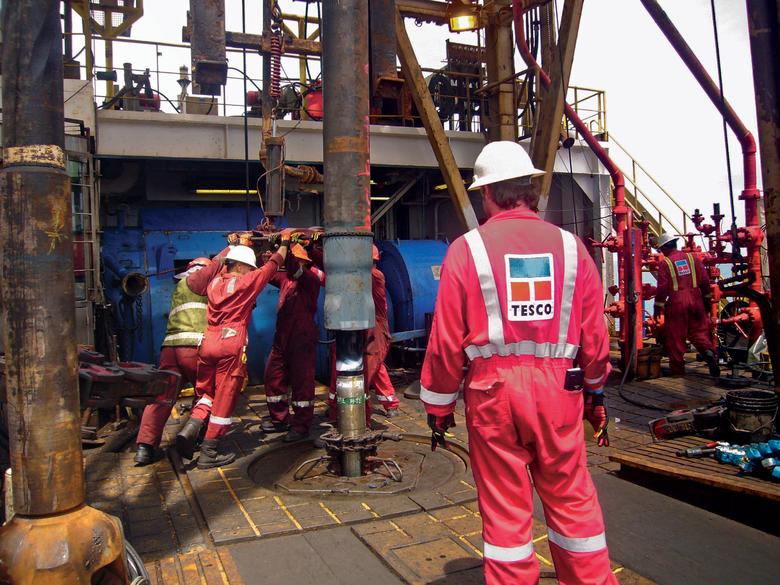 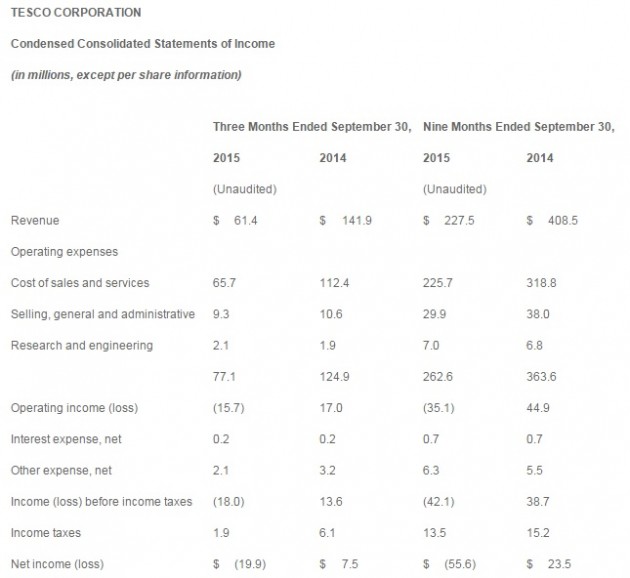 Fernando Assing, TESCO's Chief Executive Officer, commented, "We continue to be impacted by market conditions that reduced drilling activity and pricing. We are positioning our business under the assumption that the market will be lower for longer. Consistent with our commitment of sustainability through the current market, we implemented additional global restructuring actions in the third quarter with annualized savings of approximately $5 million, bringing our total annualized savings from restructuring to $40 million. These actions are designed to lower our cost structure and better match current market activity. We continue to see opportunities to improve our operating performance and improve cash generation.

"It is worth noting that the actions taken and those planned do not impair our ability to invest in markets where we can gain share or to develop technologies that can create competitive advantages for TESCO. Our service quality has convinced key customers in the Gulf of Mexico and the North Sea to expand their use of TESCO tubular services. In addition, we completed a project in North America land which demonstrated that TESCO's automated casing running technology can improve safety and reduce well costs. The combination of a strong balance sheet, efficiency improvements and performance-based growth should enable TESCO to strengthen its position and capitalize on opportunities that will arise when the market recovers."

During the third quarter of 2015, cash and cash equivalents declined by approximately $5.8 million to $56.8 million, with free cash flow near break-even after approximately $2 million of severance payments. Excluding the additional reserve, inventory declined by $1 million in the third quarter, a trend we expect to continue. Despite the challenging market environment, year-to-date, we have generated cash from operations of almost $10 million before restructuring expenses. While we were able to reduce accounts receivable by $53 million, reductions in accounts payable, prior-year tax liabilities and customer deposits partially offset this receivables drawdown. In addition, cash was consumed for capital expenditures of over $12 million primarily for prior-year commitments, $6 million in dividend payments and $6.9 million in R&E investments. Excluding letters of credit, we had access to $53.2 million under our credit facility at the end of the third quarter, with total liquidity of $110 million.

The rental top drive fleet was 134 during the third quarter with a utilization of 25%.

Operating loss before adjustments in the Top Drive segment for Q3 2015 was $3.9 million, a $1.1 million, or 39.3%, decrease from Q2 2015 and a $22.8 million, or 120.6%, decrease from Q3 2014. Our Top Drive operating margins before adjustments were (14)% in Q3 2015, a decrease from (7)% and 22% in Q2 2015 and Q3 2014, respectively. Third quarter operating loss and operating margin after adjustments were $1.0 million and (3)%, respectively, with sequential decremental adjusted margins of 13.6%. This sequential decline in profitability is primarily related to the impact of reduced global top drive production and sales as well as lower rental pricing and utilization in North and South America, partially offset by the benefits of restructuring efforts.

Other Segments and Expenses

Investments in research and engineering for Q3 2015 remained at $2.1 million, compared to Q2 2015 and $1.9 million in Q3 2014. We continue to invest in the development, commercialization and enhancements of our proprietary technologies related to our Top Drive and Tubular Services segments.

Recent declines in commodity prices below $50 per barrel have added additional uncertainty to levels of drilling activity in the fourth quarter of 2015 and in 2016. International rig count is still expected to continue to decline slightly over the rest of the year. Requests for additional pricing concessions in North America have slowed but some additional requests for moderate pricing concessions from international customers are continuing. The Company expects to incur an additional operating loss before restructuring charges in the fourth quarter of 2015.

The Company will remain focused on generating positive EBITDA and free cash flow through spending controls and working capital reductions.

During the fourth quarter of 2015 the Company expects to ship approximately 3-5 top drives with bookings predicted to occur at a similar pace. After-market and rental activity recovery will be flat to down sequentially.

Adjusted operating margins are expected to be slightly lower than third quarter levels, as pricing pressure is expected to outweigh the benefits from restructuring realized to date.

Revenue from the Tubular Services segment is expected to decline primarily from lower activity in international markets.

Operating margins are expected to decline sequentially due to the leverage impact of lower revenue exceeding the benefits from restructuring realized to date.

Other Segments and Expenses

The effective tax rate for the remainder of 2015 will be mainly driven by the impact of earnings and losses by tax jurisdiction as well as non-deductible items such as certain foreign exchange gains and losses, but we do not expect to record any tax benefits on losses.

Total capital expenditures for 2015 are expected to be approximately $14 to $15 million.

"We are committed to sustainability through difficult market conditions while preserving capacity and the capability to deliver results over the long run through technology and service excellence. Accordingly, despite the current challenging market, we continue to successfully implement the strategy we outlined last year," Assing added. "Technology is a key differentiator for TESCO, and we are committed to investing in the development of products and services that we believe can improve both market share and margins.

"Consistent with this, we are gaining tubular services market share in our targeted offshore markets and are encouraged by greater receptiveness to technology adoption in North America land due to the related cost reductions it can bring and have successfully completed two pilot casing running jobs that have clearly demonstrated the full potential of our technologies. We plan to accelerate the deployment of this optimized offering.

"In the Gulf of Mexico, we were awarded our first floater rig to perform a complete tubular service package, including casing and completion running, under our existing multi-rig, multi-year contract. This contract begins in late 2015. Also, we have secured a high-end deepwater completions running contract with a new client for two rigs, with the first one starting in the second quarter 2016. In the North Sea, we were also awarded a large contract to run complete tubular services packages, including casing and completions running on six platforms that begins in early 2016.

"In addition to increased third-party land top drive re-certifications, we successfully completed our first third-party offshore top drive recertification project in the third quarter and believe we will have additional opportunities in this market. We are seeing increased top drive sales opportunities from the Eastern Hemisphere with the greatest opportunity coming from China. Finally, we continue to actively test our new pipe handling technologies.

"While our short-term priority remains cash generation and improved profitability, we will continue to implement our strategy and fund technology investments as market conditions dictate. We intend to maintain a strong balance sheet to provide stability through periods of volatility and enhance optionality when the market begins to recover," Assing concluded.