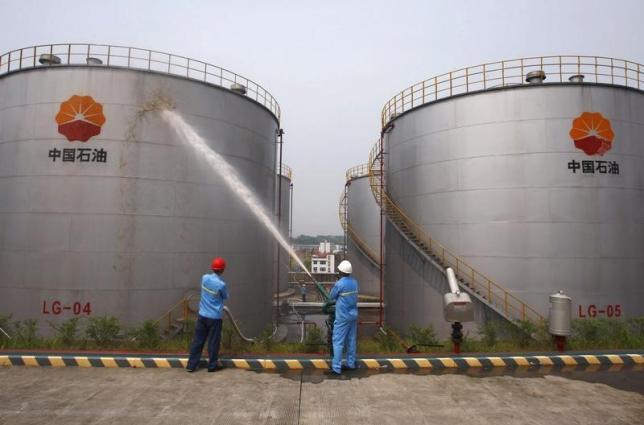 China is likely to double its strategic crude oil purchases next year as one of the biggest ever price routs spurs a buying spree that would offer some support to battered markets for the commodity.

Beijing will add 70-90 million barrels of crude to storage tanks in 2016 to build up its strategic petroleum reserves (SPR), according to most respondents in a poll of five analysts and data collected by Reuters analysts.

That is the equivalent to almost a fortnight's worth of average Chinese imports and would help push the country's overall oil purchases to record levels, challenging the United States as the world's top importer.

Any sign of fresh buying for China's strategic reserves would offer rare support to crude prices , which have more than halved since 2014 on soaring global output that has seen 0.5 to 2 million barrels of oil being churned out every day in excess of demand. The Organization of the Petroleum Exporting Countries (OPEC) meets in Vienna on Friday to discuss its output target.

"Next year, stockpiling is going to play a bigger role (in China) than this year," said Wendy Yong at energy consultancy FGE.

China's secretive SPR build-up, which the government wants to raise to OECD-standards of 90 days' worth of import demand, started in 2006 as part of a drive to become more energy independent. The government's National Development & Reform Commission did not respond to requests for comment on Friday.

Researchers at FGE, consultancy ICIS and bank Barclays estimated that China would double crude imports for SPR facilities to 70-80 million barrels next year, versus 30-40 million barrels in 2015, while other analysts said the volume could be higher still.

"There is still significant spare capacity in China's SPR, which can take in another 12 million tonnes of crude (88 million barrels)," said Yaw Yan Chong, Asia director at Thomson Reuters Oil Research and Forecasts, which he said the government would try to fill provided prices remain relatively low.

He added that this was equivalent to 66 percent of remaining capacity in SPR facilities based on an analysis of China's import trade data.

Energy Aspects said it was possible that 150 million barrels of capacity could be filled in 2016, but said that some of that would likely slip into 2017.

The discrepancy in estimates is partly because some commercial storage is also used for strategic reserves without being reported as such.

Six new SPR sites, including some commercial assets being used for the programme, with a total capacity of 146 million barrels are under construction and experts expect most of them to be filled next year.

But some senior Chinese traders were more cautious, arguing that a clampdown on safety after the deadly Tianjin port blast this year could delay new depots, stifling imports.

A trading executive previously involved in reserve purchasing estimated an additional 30 million barrels would be stockpiled for 2016, versus 20-30 million this year. He declined to be identified due to the sensitivity of the matter.

"As China has already built up a comfortable cushion of stocks, the pressure to rush has eased, especially as the government is more convinced that low oil will stay for another year or two," he said.

But analysts expect excess oil production to cushion the impact on global oil markets of the strategic stockpiling.

"Compared with the estimated excess supply in the market of about 1.5 million bpd, our estimated 0.23 million bpd of crude purchases for the SPR would provide only marginal support for the market balance."