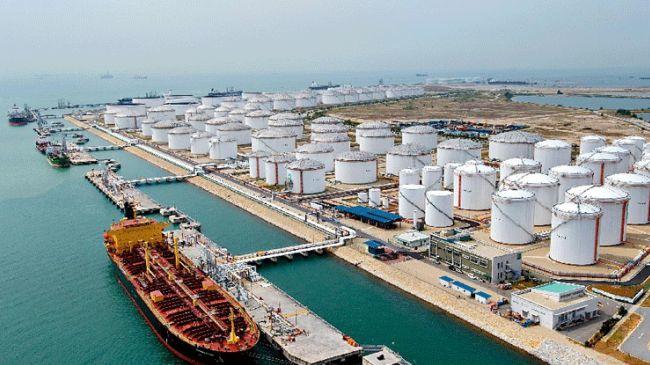 Iran is taking steps to ramp up oil exports ahead of an end to U.S.-led sanctions, extending crude contracts with its top two Chinese buyers into 2016 and starting talks with other potential buyers there, sources involved in the talks said.

Previously OPEC's No.2 exporter, Iran is keen to recoup oil market share lost during U.S. and European Union sanctions over its nuclear program and is aiming to boost oil output by 500,000 barrels per day (bpd) - equal to about 50 percent of current exports - in early 2016.

Sinopec Corp (0386.HK), Asia's largest refiner, and Chinese state trader Zhuhai Zhenrong Corp will together lift around 505,000 barrels per day (bpd) of crude from Iran in 2016, the same as this year when they took roughly half of the Islamic Republic's total exports, the sources said.

China bought 536,500 bpd of Iranian crude oil in the 10 months to end-October, down 1.9 percent on a year ago as a third regular client, independent Dragon Aromatics, halted purchases for safety checks after a fire in April.

Anticipating an end to sanctions at the start of 2016, Tehran last week offered about 50 oil and gas projects to be developed by foreign investors, and over the weekend unveiled much-awaited revisions to its contract aimed at luring back investors.

Any increase in Iranian exports will be politically sensitive as it threatens oil revenues of other major exporters such as Saudi Arabia and Russia, but the tone of recent comments from Washington and Europe points to a lightening in trade restrictions early in 2016.

Iranian oil officials have met in the last two months with traders at PetroChina (0857.HK), the country's second-largest state refiner, and state-run CNOOC, which runs a petrochemical complex with Royal Dutch Shell (RDSa.L), three sources involved in the talks said.

China's state-owned energy companies have been reticent to boost contractual volumes or sign up new term deals under the sanctions because of fears about the international repercussions.

But they are becoming less fearful of the political fallout as the prospect of the ban being lifted draws near.

"[The] companies are waiting for firmer news on the lifting of sanctions before making any commitments," said one trading executive.

A Zhuhai Zhenrong spokeswoman confirmed the 2016 agreement with Iran. Sinopec declined to comment. The National Iranian Oil Company did not immediately respond to requests for comment.

Under the main China contracts renewed for 2016, Zhuhai Zhenrong Corp is expected to lift an average of 240,000 bpd and Sinopec 265,000 bpd, the sources said. The Sinopec agreement was primarily for crude and a small portion of condensate.

Iran was China's No.6 crude supplier in 2015, but faces competition from rivals like Saudi Arabia and Iraq. Iranian oil is more expensive than similar grades from other Middle Eastern suppliers due to its lower sulfur content and slightly higher yield of gasoline, said a senior trader with CNOOC.

With no clear timeline for a restart at petrochemicals producer Dragon Aromatics, one of Tehran's key condensate buyers, after its April fire, Iran hoped new buyers in South Korea, Japan as well as in China would pick up the slack, traders said.

The CNOOC-Shell petrochemical plant in southeastern Guangdong province could also be a replacement buyer for condensate, they said. The plant was forced to drop a regular supply pact in mid-2012 when the European Union put an embargo on trading Iranian oil.

IRANIAN OIL WILL UP