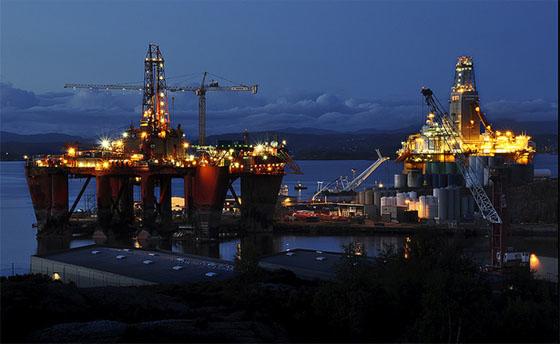 Norwegian businesses expect to cut production as they struggle to cope with slumping oil prices and falling investments, according to the central bank's regional network report.

An indicator for aggregated output growth for six months ahead dropped to minus 0.01 from 0.06, according to the bank's report released Friday. That's the lowest since early 2009. The indicator measuring production over the past three months slid to 0.02 from 0.11.

"Weak growth is here to stay for a couple of years," said Joachim Bernhardsen, an analyst at Nordea Bank AB. He sees mainland economic growth stalling over the next six months, driving the central bank to cut rates twice next year. Still, rates will remain unchanged this month as the survey was weak but "not a game changer," according to Nordea.

"Lower activity in the oil sector is having a damping effect on growth prospects for most sectors, while the level of activity is expected to be sustained by rising growth in public investment," the central bank said in the report. 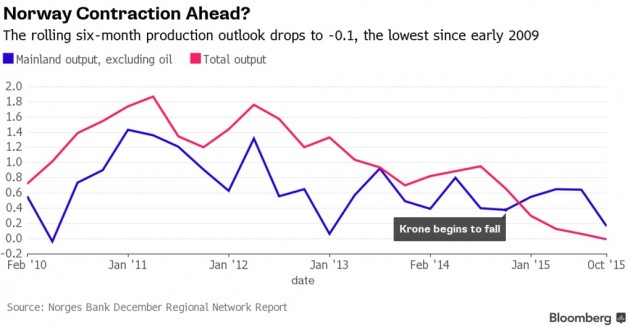 Norges Bank last month kept rates at 0.75 percent and said the oil-dependent economy is slowing more than anticipated despite a weak krone and government stimulus. The bank didn't provide any update to its September signal that it anticipates will be further reduced in "the coming year."

Since then, data has shown that manufacturing production remained below 50 -- a level below which signals a contraction -- for the seventh consecutive month. Unemployment was at 4.6 percent in August and September. While that is enviably low compared to neighboring nations, it is the highest level since at least 2006.

The currency has lost about 6 percent against the euro in the past year, driven down by falling oil prices. That relieves some pressure for policy makers as the weak currency helps exports. Central bank Governor Oeystein Olsen last month called the weak krone a "success," and said in a speech on Thursday that a depreciation in the currency is a key way to help the oil-reliant nation withstand the drop in the price of Brent crude.