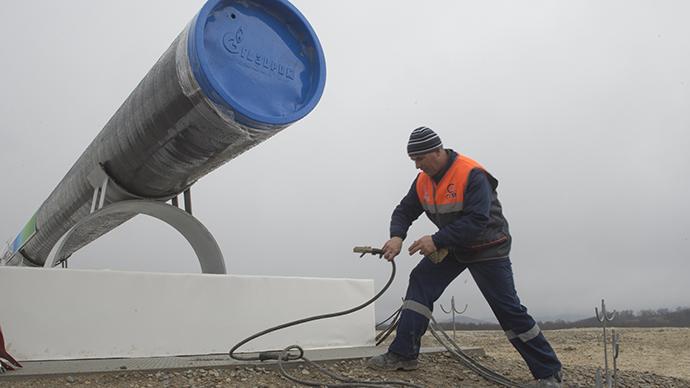 Russia's ambitious project for its Turkish Stream gas pipeline across the Black Sea looks set to become the next casualty of the war of words between Russian President Vladimir Putin and Turkish President Recep Tayyip Erdogan.

And it will likely cost Gazprom billions of dollars or euros, whilst prompting Turkey to look to new suppliers, notably northern Iraq.

A Reuters report from Moscow on 1 December cited sources in Gazprom as saying that Russia may freeze work on Turkish Stream for several years as part of its retaliation against Ankara for last month's downing of a Russian air force jet over the Turkish-Syrian borderlands.

In practice, any announcement that the project was being postponed - or even cancelled outright - would do little more than confirm that Russia has already concluded that its priority in developing new gas connections to Europe is the planned Nordstream 2 pipeline.

But what any significant delay or outright cancellation would mean is the writing off of considerable expenditures to date on developing both Turkish Stream and its ill-fated predecessor, South Stream.

Gazprom has already spent €1.8bn on purchasing physical pipe for the first and second "strings" - or lines, of pipe to be laid under the Black Sea. Pipe, delivered by Germany's Europipe and Russia's United Metallurgical Company (OMK) under the first string contract, signed in January 2014, is now largely stashed on the wharves of the Bulgarian port of Varna. The fate of pipe ordered for the second string, under contracts placed in March 2014, is not known.

Secondly, Gazprom will have to swallow the fact that it paid out around €400m to keep the Saipem 7000 pipelaying vessel and a sister ship on standby for seven months from December 2014 to July 2015 before it decided it would not undertake pipelaying this year.

But the biggest cost of all concerns Gazprom expenditures within Russia itself. Since 2010 the Russian gas giant has been developing an ambitious project capable of delivering 63 billion cubic metres (bcm) of gas from central Russia to a terminal at the Black Sea port of Anapa, the planned jumping off point for both South Stream and Turkish Stream. This project, which it calls the 'Southern Corridor', involved laying 2,506 kms of new pipeline and equipping them with 10 compressor stations to move the gas southwards. By July 2015, Southern Corridor development had clearly run into problems, with work on the 880.6-km western route from Voronezh completed but with delays on the 1,625.6-km eastern route from Nizhny Novgorod.

In December 2013, Gazprom estimated the cost of the Southern Corridor project at 738.5bn roubles, then worth $22.5bn but now equivalent to around $10.5bn as a result of the collapse of the Russian currency. How much has actually been spent, and how much it will cost either to tidy up work that needs to be completed or that needs to be abandoned as a result of any delay to Turkish Stream is not known. But it would likely run to billions of dollars or euros.

The prime purpose of this system, which was due for completion in 2017, was to deliver gas to Anapa so that it could then be exported to Europe, initially via the South Stream project, subsequently via Turkish Stream.

So if Turkish Stream is abandoned, then there is little point in continuing with the original Southern Corridor project. There will be some gains, since cities and communities in southern Russia will benefit from improved access to natural gas, but not to the extent that they would need to be served by a brand new 63 bcm/y system.

For Turkey, the issue is not so much financial as practical. If Russia is no longer in a position to provide extra volumes of gas to meet the anticipated needs of a growing Turkish economy, it will have to look elsewhere for fresh supplies. There will therefore be a much greater focus on getting gas from Northern Iraq as quickly as possible.

In November 2013, the Government of Turkey signed a General Sales Agreement with the Kurdistan Regional Government covering gas exports from northern Iraq to Turkey. The agreement set initial delivery volumes at 4 bcm/y in 2017 with annual two bcm/y increments envisaged until they reached a plateau level of 10 bcm/y in 2020.

Just two weeks ago, on 20 November, both the Kurdish authorities and Genel Enerji, the Anglo-Turkish company developing Miran and Bina Bawi, the two principal fields that would provide the gas, told the Atlantic Council conference in Istanbul that they now considered 10 bcm/y to be just an initial level, and that exports could reach 20 bcm/y in the early 2020s.

However, they did acknowledge that the start of Kurdish gas exports to Turkey was still three or four years away.