The U.S. federal government, with thousands of facilities and vehicles in locations across the United States and abroad, is one of the largest energy consumers in the world, but that consumption is declining. The U.S. Department of Energy's Federal Energy Management Program (FEMP) shows total delivered-to-site energy use by the federal government fell to 0.96 quadrillion British thermal units (Btu) in fiscal year (FY) 2013, the lowest recorded since 1975, the earliest year for which data are available.

In FY 2013, vehicles and equipment energy usage accounted for 62% of all federal energy consumed, with the remainder consumed by federal facilities. The U.S. Department of Defense and the United States Postal Service together accounted for 94% of vehicles and equipment energy usage, which declined 19% from FY 2011 to FY 2013. Much of the decline since 2011 can be attributed to lower consumption of jet fuel, a major fuel source for the U.S. Air Force and the largest energy source consumed by the federal government.

Energy consumed in federal government facilities has generally been declining over the past four decades. The reduction stems from both the total square footage occupied by the federal government, which continues to fall from its peak in FY 1987, and from the energy consumed per square foot inside federal buildings, which has been declining since FY 1975. 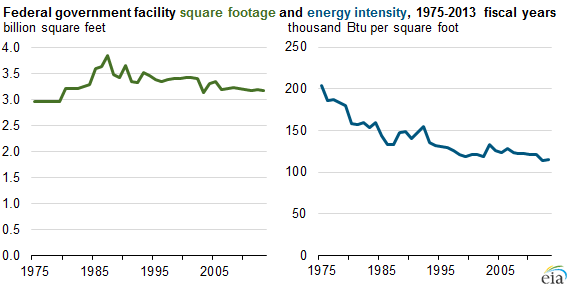 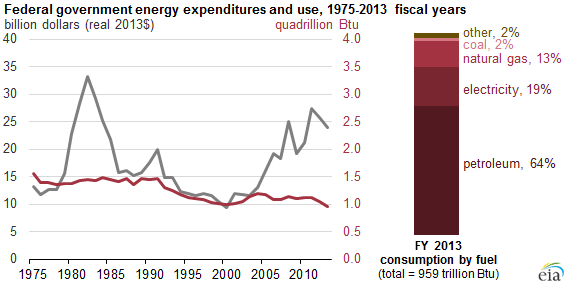 Several sustainability goals currently affecting energy consumption by the U.S. government were established by the Energy Independence Act (EISA) of 2007, which set requirements for federal agencies, including: