GULF OF MEXICO: OIL UP 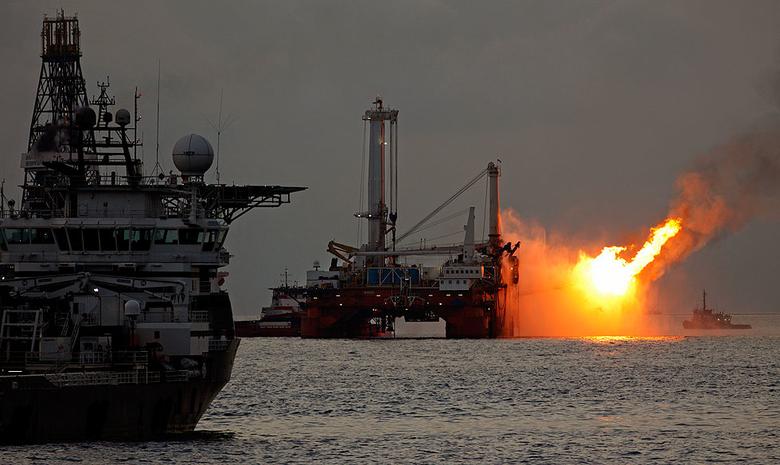 GULF OF MEXICO: OIL UP

Because of the long timelines associated with Gulf of Mexico (GOM) projects, the recent downturn in oil prices is expected to have minimal direct impact on GOM crude oil production through 2016. EIA projects GOM production to reach 1.52 million barrels per day (bbl/d) in 2015 and 1.61 million bbl/d in 2016, or about 16% and 17% of total U.S. crude oil production in those two years, respectively.

The forecasted production growth is driven both by new projects and the redevelopment and expansion of older producing fields. Five deepwater projects began in the last three months of 2014: Stone Energy-operated Cardamom Deep and Cardona projects, Chevron-operated Jack/St. Malo fields, Murphy Oil-operated Dalmatian, and Hess-operated Tubular Bells. Also occurring at the end of 2014 was the redevelopment of Mars (Mars B) and Na Kika (Na Kika Phase 3), both of which are mature fields. Cardamom Deep, Jack/St. Malo, and Tubular Bells were slated for a late 2014 start-up, as well. Although industry press releases have indicated they have started producing, their production data have not yet been reported to the Bureau of Safety and Environmental Enforcement (BSEE) under the U.S. Department of the Interior.

The relatively high number of fields that came online in 2014 and are scheduled for 2015 and 2016 production start-ups reflects the revival of interest and activity in the GOM following the moratorium on deepwater drilling after the 2010 Deepwater Horizon incident. While the moratorium officially lasted from April 30 to October 12, 2010, there were relatively few field start-ups in 2011 through 2013.

Thirteen fields are expected to start up in the next two years, eight in 2015 and five in 2016. Development of offshore fields requires both surface and subsea production equipment. The high cost of surface structures limits their application to large fields. Those fields with reserves not large enough to justify the necessary capital expenditure use subsea infrastructure to connect to nearby existing platforms. This approach, known as a subsea tieback, can reduce project costs and start-up times. More than half of the projects starting up in 2015 and 2016 will be subsea tiebacks to existing production platforms. These new projects, combined with continuing production from the developments brought online in late 2014, are forecast to add 265,000 bbl/d by the end of 2015. The production estimates for 2015 and 2016 (see first graph) include adjustments to account for seasonal shut-ins from hurricanes.

The current low oil price adds uncertainty to the timelines of deepwater GOM projects, with projects in early development stages exposed to the greatest risk of delay. In an effort to reduce this risk, producers are collaborating to develop projects more cost-effectively, to shorten the time to final investment decision and first production, and by sharing development costs. For instance, Chevron, BP, and ConocoPhillips recently announced a collaborative effort to explore and appraise 24 jointly held offshore leases in the northwest portion of the Gulf of Mexico's Keathley Canyon. 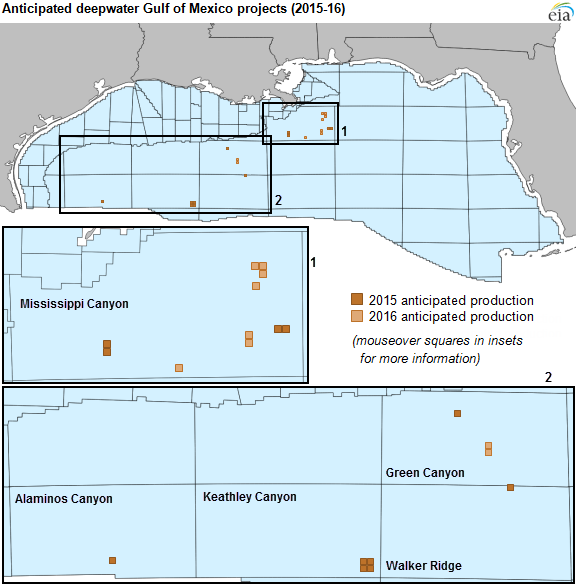