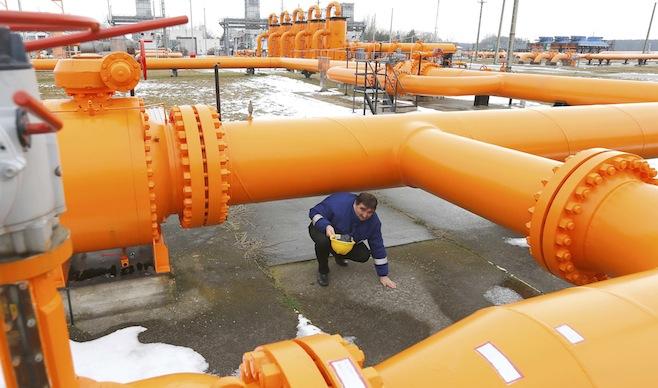 The gas war between Russia and the West has been limited to the verbal so far and not seen any casualties except for the cancellation of the South Stream project.

The problem is not between Russia and Europe, except for the fact that Ukraine is in between and that the US is exploiting the situation for possible huge exports of its gas in the future.

The 'Telegraph' said in an article that 'The United States is poised to flood world markets with once-unthinkable quantities of liquefied natural gas" and 'posing a major threat to Russian gas dominance in Europe'. It quotes the US Energy Secretary Ernest Moniz that 'four LNG export terminals are under construction and the first wave of shipments may begin before the end of this year or in early 2016 at the latest'.

It is a fact gas production in the US has increased sharply in the last 10 years with the advent of shale gas, which has become possible through new fracking technology, improved rig efficiency, reductions in costs and the near acceptability of the industry by the public there.

Shale gas production has increased from very little in 2000 to about 400 billion cubic meters (bcm) a year now, almost half of total US production. But the gas has been absorbed by the US itself, which brought in a revival for many industries — especially in the petrochemical sector — by taking advantage of low gas prices as a result of increased production.

There are many LNG export projects under consideration for licensing in the US, but the process is slow and the cost may be high. The $18 billion terminal at Sabine Pass in Louisiana is expected to export only 2 bcm, and by extension you can imagine what an export capacity of 70 bcm a year would cost by the early 2020s.

To adjust to US LNG exports, the cost on the other side of the Atlantic in Europe is expected to be around $200 billion in new terminals, pipelines, storage and interconnections between countries according to Sanford Bernstein analysts.

Therefore, US LNG is not seen to be competitive with the much cheaper and readily usable Russian gas. This is why experts are split on whether the US can become dominant in LNG exports as 'Moody's (has) warned that most of the 30 gas liquefaction projects planned in the US and Canada will never get off the ground, chiefly due to the linkage between LNG contracts and the price of crude' and 'The drop in international oil prices has wiped out the price advantage of US LNG projects'.

Some investors are still going ahead regardless, while others believe that as soon as the political situation clears, Europe will revert to the much cheaper Russian gas.

The question then is strictly geopolitical as Europe tries to diversify its supply away from Russia even though British Gas owner Centrica chairman Rick Haythornthwaite said recently: "Whatever we might want as Europe, we need to be very careful about being pragmatic about the realities of it ... I think it's unrealistic to think that Russian gas is going to be replaced in the near-term."

His chief executive added: "There is no way the United States can supply that volume of LNG to replace it." He added that Russia had been "a reliable supplier of gas all the way through the Cold War" and that Europe and Russia need each other.

Europe may be shooting itself in the foot by opposing the Russian South Stream project which would have bypassed the trouble spot of Ukraine to bring 67 bcm of gas to Europe. The US is also in opposition of a potential deal between Russia and Greece to supply gas to the latter through Turkey even though Greece's foreign minister, Nikos Kotzias, said Gazprom made a "very good offer", with guaranteed gas supplies for 10 years at good prices.

It is said that Russia would supply 47 bcm of gas to Greece, generate much-needed revenue for the Greek and create 2,000 jobs. The US favours deliveries from Azerbaijan and is scrambling to make a different offer to Greece.

Europe may diversify its supplies of gas by US imports, Norwegian expansion, imports from West Africa and so on. However, given the increase in demand there will always be a huge need for Russian gas. And it is better for Europe to bring a peaceful solution to the Ukraine crisis or to foot the bill of Russian gas to Ukraine and give no reason whatsoever for Russia to cut supplies.

The writer is former head of the Energy Studies Department at the Opec Secretariat in Vienna.