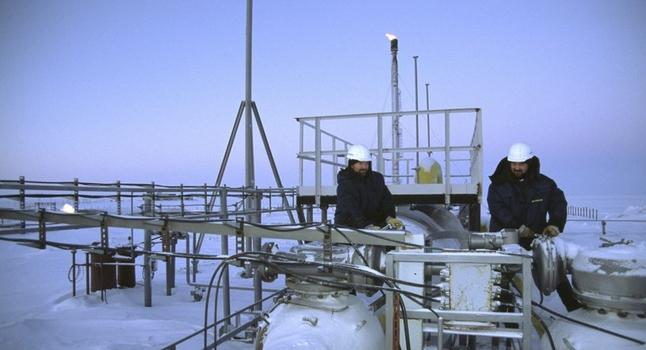 Russian oil and gas condensate production, among the world's largest, remained at a post-Soviet record level of 10.71 million barrels per day in April, underpinned by a recent recovery in oil prices, Energy Ministry data showed on Saturday.

Global oil prices jumped 21 percent in April to over $66 a barrel due to slowing drilling activity and increasing political tensions in the Middle East, having collapsed from a peak of $115 per barrel in June last year.

The price slump has significantly hurt the Russian economy, which relies on oil and natural gas for around half the federal budget revenues. Russia's GDP contracted by 3.4 percent in March year on year.

Russian production of oil and gas condensate, a type of ultra-light oil, stood at 43.830 million tonnes in April, the data showed.

A Russian Energy Ministry delegation will fly to Vienna next month to meet officials from the Organization of the Petroleum Exporting Countries.

So far Russia, which is not an OPEC member, has failed to persuade OPEC to cut oil output in order to prop up prices.

Last month, OPEC oil supply jumped to its highest in more than two years, boosted by record or near-record supplies from Iraq and Saudi Arabia.

Total Russian oil exports via pipeline monopoly Transneft edged up by 0.7 percent to 4.4 million barrels per day, or 18.021 million tonnes in April.

Russia is aiming to increase its crude oil exports in the coming years and the Energy Ministry expects exports to be 3 million tonnes higher this year.

Natural gas output was 52.64 billion cubic metres (bcm), or 1.75 bcm per day, down from 1.78 bcm per day in March. The Energy Ministry did not publish gas output data for Gazprom , the world's top natural gas producer.