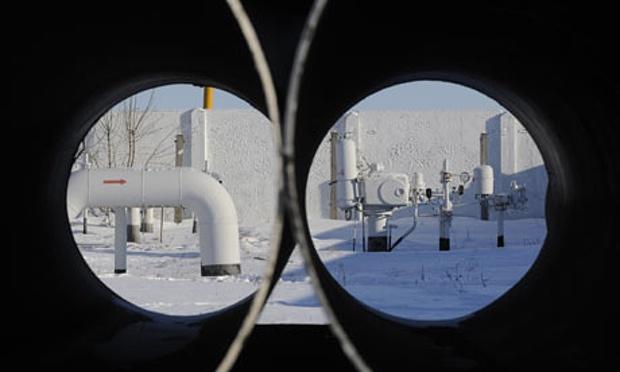 The pipeline games in Europe never end. South Stream is dead, but it was soon resurrected as Turkish Stream, dealing a "heavy blow" to Brussels (this project has since hit a snag); the new government in Greece immediately saw an opening, and so Greek Stream was born, a pipeline that seems to have everything going for it except a clear purpose. And just to make sure that Northern Europe is not left behind, Russia is mulling an expansion to Nord Stream, the pipeline that connects Russia to Germany.

Not to be outdone, other dead pipelines are returning: there is talk of resurrecting Nabucco and the Italy-Greece Interconnector, both of which vanished when Azerbaijan decided to ship its gas to Europe through the Trans-Adriatic Pipeline (TAP). Pipelines that have been on life-support are also getting a jolt: the Trans-Caspian pipeline with Turkmenistan is getting a few nods recently, and Europe's focus on North Africa means that Galsi, a proposed pipeline from Algeria to Sardinia and then Italy, might resurface soon.

And then there is new stuff. Many Greeks hope to build a pipeline from Cyprus and/or Israel to Southeast Europe, and in doing so, "reshape regional politics." If sanctions on Iran are lifted, that too will be a "game changer" for Europe since Iran can "challenge Russia's dominance." Later, Iraq might play a role as well, since its undeveloped gas resources offer yet another "game changer." In fact, there are so many "game changes" that one has trouble remembering what game we're playing any more.

All this would be comical if it were not so serious. So much energy is spent to lobby in favor or against these pipelines, while there is an army of people whose role is to explain how each of these pieces of steel will alter the "geopolitical equation" in Europe. The actual gas business in Europe is vanishing—demand for gas is down 23 percent relative to 2010—but the business of proposing and analyzing pipelines is booming. In fact, that business has never been better, especially if there is a way to get taxpayers to support these projects in name of "strategy," "energy security" or "solidarity" (take your pick).

The problem is that this obsession with pipelines is counterproductive—for four reasons. First, pipelines do not determine flows: infrastructure is necessary, but flows depend on market realities. Nord Stream, for instance, expanded Russia's export capacity by a third in 2012, yet Russia's exports are still far below their pre-crisis levels. Exports from Algeria have suffered the same fate: in 2011, Algeria inaugurated a new pipeline to Spain, but Algeria's pipeline exports to Europe were 35 percent lower in 2014 than in 2010. By contrast, Norway is not building new pipelines but its exports are steady and its market share is growing (since demand, the denominator, is falling).

Second, gas is fungible. It is not fungible immediately, but in the end, it moves around. Ukraine is proof enough: Nord Stream reduced the amount of Russian gas that transits Ukraine, but it increased the supply of gas in Germany, and this surplus gas found its way into Ukraine from the west. Turkish Stream may do the same: it will allow Russia to deliver gas to Turkey without crossing Ukraine, Moldova, Romania and Bulgaria, as it currently does, thus freeing up the existing infrastructure to be used differently. And TAP, which will carry Azeri gas though to Italy, will also push gas into the Balkans, partly serving the same purpose as Nabucco, which TAP made obsolete. Pipelines are not as sticky as they seem, and when they become operational, other flows adjust to the new reality.

Third, hefty political rhetoric complicates project development. The public sector can help pipelines by streamlining permitting and regulation, by coordinating among various stakeholders, and by offering funds to projects that need a slight push. But when pipelines become symbols of independence or of impending doom, and when their development is seen as a major geopolitical event that will reshape the world for generations to come, then there is trouble. Proposals beget counter proposals, and pipelines act as lightning rods that attract all the political energy that should be directed to more productive uses. Pipelines are no longer about steel and gas molecules but about pride, security and dependence—in short, they become embroiled in intangibles that are often impossible to manage or resolve.

Fourth, pipelines distract us from reality. The casual observer who reads about pipeline wars would have no idea that Europe's gas supply position is far, far more diverse today than ever before; that Russia's market share in Europe has been flat for two decades; that non-incumbent suppliers—meaning not Russia, Norway and Algeria—provided about 10 percent of Europe's gas in 2014, up from almost zero in 2000; that Norway is gaining the most market share in Europe; that gas demand is collapsing, calling in into question the need for all these pipelines; that gas prices, whether or not they are linked to oil, are about as low as they have been in the last eight years; or that the "geopolitical" importance of all these pipelines is premised on half-articulated theories of international politics rather than real hypotheses and hard evidence.

Worst of all, at a time when Russia is waging an actual war in Ukraine and can trigger a major change in the status quo in Europe, and at a time when a powerful, ambitious and strategic leader in Russia is being cornered by sanctions, isolation and a weakening economy—at this time, an enormous amount of energy is directed to support or oppose a spaghetti bowl of pipelines whose significance is marginal in the grand scheme of things. Let's put the pipeline wars to rest—please.