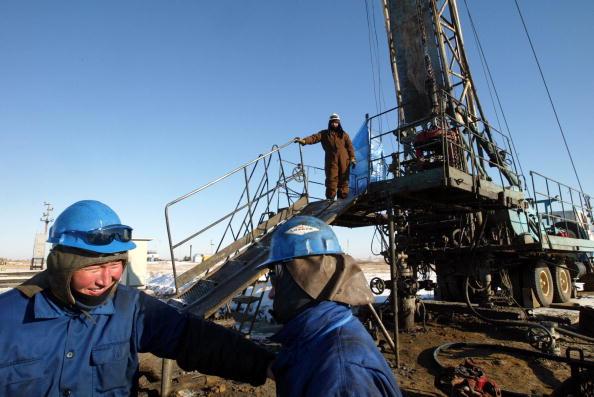 Stubbornly low oil prices and delays on a mammoth offshore project have prompted Kazakhstan's national wealth fund to sell a 10 percent stake in the state energy company to the National Bank, the country's top fiscal institution.

The sale – ordered by government decree on July 29 – amounts to the state selling itself shares for $4 billion in cash and is sparking questions about how well Kazakhstan is coping with a slowdown in economic growth.

"The share acquisition is a highly unorthodox move for a central bank, although the National Bank does already control the state pension fund," Alex Nice, a Kazakhstan analyst at the London-based Economist Intelligence Unit, told EurasiaNet.org. "The National Bank's primary role is to set monetary policy and maintain financial stability."

The transaction is ostensibly intended to help energy company KazMunayGaz (KMG) reduce its $20 billion debt portfolio, which has been exacerbated by low oil prices. The global oil benchmark stood at around $53 per barrel on July 31.

On top of that, KMG is experiencing protracted delays at the super-giant Kashagan oilfield. The project has long been touted as a driver of prosperity, but the field is now not expected to come on line until 2017. "KMG is planning to buy back some of its historical debt issuance, hence it needs cash," Anuar Ushbayev, managing partner at Kazakhstan's Tengri Partners investment firm, told EurasiaNet.org.

The sale will also generate funds for a separate $4.7 billion bailout deal announced in early July. That agreement will see KMG selling half of its 16.8 percent stake in Kashagan to Kazakhstan's Samruk-Kazyna sovereign wealth fund. Samruk-Kazyna is KMG's own parent company. KMG will use $2.2 billion from that deal to reduce its loan portfolio.

"To allow KMG to do this, Samruk-Kazyna is planning to acquire a part of KMG's stake in the Kashagan project," Ushbayev explained. "Now, the sale of 10 percent of KMG by Samruk-Kazyna to the National Bank is aimed precisely at raising the necessary cash to finance the [bailout]."

Ultimately, the National Bank is stumping up financing for the deal, as the Almaty-based Halyk Finance investment bank pointed out. "Samruk-Kazyna will finance the purchase of the stake in Kashagan from the funds to be received from the [National Bank], which equals 85 percent of the required amount. Thus the liquidity position of Samruk-Kazyna will not be negatively affected," Halyk Bank said in a research note.

Nice, of the Economist Intelligence Unit, said he believed it was unlikely that the initiative for the operation came from within the National Bank, which raises further questions about the financial body's independence when it comes to setting fiscal policy.

Ushbayev argued that although the move is unusual, it is not unheard of. "There is nothing to preclude a central bank from investing into the equity asset class," and "many central banks do precisely that," he said.

It is more usual "to invest in a diversified portfolio of shares, denominated in foreign currencies," he conceded. "A concentrated investment of that size into a domicile state-owned business is much less common, perhaps only seen in China, during the recent stock market bubble collapse."

Since all the entities involved in the KMG deal are owned by the state, the cash carousel is being likened to robbing Peter to pay Paul.

Economist Sayan Kombarov suggested in remarks to the Kursiv newspaper that the operation amounted to "legalized robbery" funded by taxpayers.

It is not just debt-ridden KMG that has taken a battering from the fall in global oil prices, but Kazakhstan's economy in general.

Astana's revenues have been hit by the twin pressures of a regional economic downturn emanating from sanctions-hit Russia and a slump in the value of the tenge. That has led the government to scale back its growth forecast to 1.5 percent this year (down from 4.3 percent last year).

Astana has already dipped into its National Oil Fund, which saves energy revenues for a rainy day, to bolster the economy.

News of the unorthodox deal involving KMG, Samruk-Kazyna and the National Bank has some analysts wondering about the National Oil Fund's condition.

"Why is this share acquisition being done by the central bank, rather than the National Oil Fund, which is the most common channel through which the state provides support to the real economy?" asked Nice. "This raises questions about the condition of the National Oil Fund itself," he said.

ASIA'S GAS DEMAND WILL UP
Non-OECD countries in Asia will collectively become the largest importers of natural gas by 2050.
English
All Publications »
Feedback: