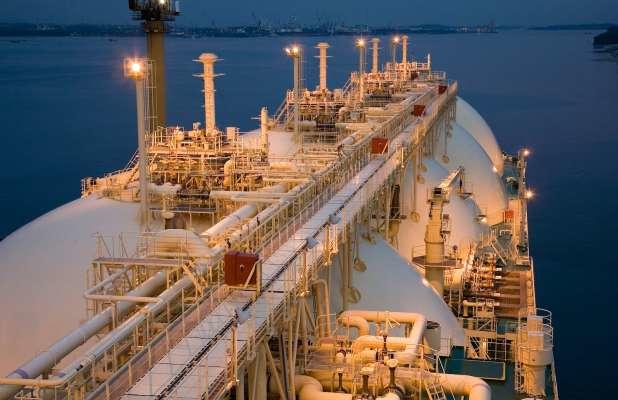 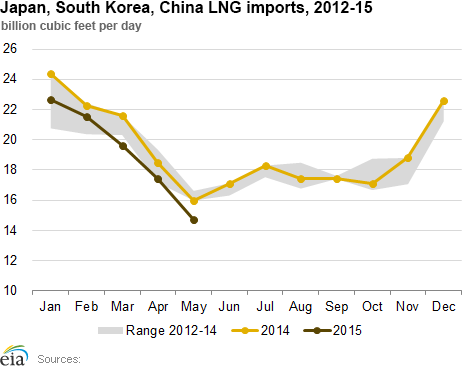 Asia Pacific imports of LNG down in 2015 on mild weather, lower demand for power generation

Imports of liquefied natural gas (LNG) in Japan, South Korea, and China, the three largest global importers, all located in the Asia Pacific region, have declined by an average 1.4 billion cubic feet per day (Bcf/d) (6.7%) in the first five months of 2015 compared to the same period in 2014. These three countries accounted for 61% of global LNG imports in 2014 according to data from the International Group of Liquefied Natural Gas Importers. Reduced consumption of LNG was largely driven by higher use of coal-fired and nuclear power plants in South Korea, lower consumption of natural gas in power generation (gas burn) in Japan, and increased imports of lower-priced pipeline gas in China. South Korea accounted for the largest decrease in LNG imports, an average 0.9 Bcf/d (15.1%) in January-May 2015 as compared to the same period in 2014, primarily because of a decline in gas use in power generation.

In South Korea, mild winter and government policies, which favor the use of coal and nuclear over natural gas in the power generation mix, led to declines in natural gas consumption in the power sector for the past two years. Nuclear generation has been increasing since the end of a nuclear safety scandal in early 2014 involving irregularities uncovered during safety inspections of nuclear facilities. Generation by coal and nuclear power plants increased by 8% and 3%, respectively, in the first quarter of 2015, as compared to the same period last year, while gas burn declined by 20%, according to data by the Korea Energy Economics Institute (KEEI). Additional nuclear capacity, including commissioning of Shin-Wolsong unit 2 this month and the restart of Shin-Wolsong unit 1 combined with relatively flat demand, is likely to further reduce the call on gas-fired generation in South Korea's power mix, and lead to lower LNG imports.

In Japan, lower LNG imports in the first five months of 2015 were largely driven by lower demand for gas-fired generation in the power sector. Consumption of all fossil fuels (coal, crude oil, heavy fuel oil, and LNG) in power generation has declined year-on-year over this period, accounting for a 7% decrease in thermal generation, while hydro generation increased by 16%, according to data from the Federation of Electric Power Companies of Japan (FEPC). Fossil fuels generation has decreased despite the sharp decline in crude oil prices since the second half of 2014 and a decrease in LNG import prices, which are linked to crude oil prices with a lag of several months. The planned restarts of nuclear power plants in the coming months (Kyushu Electric's Sendai power plant Unit 1 in August and Unit 2 in October 2015, totaling 1.78 GW of capacity) and several other plants in 2016, totaling 9.4 GW, will further reduce the demand for fossil fuels generation in the coming years.