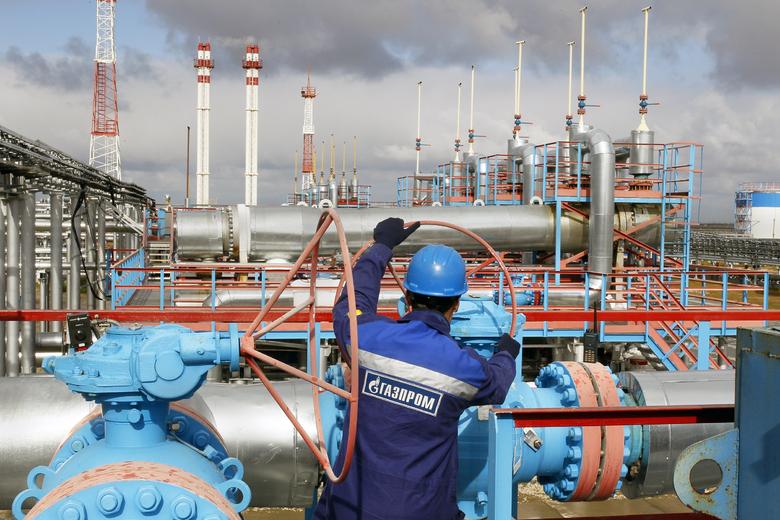 It was not too long ago that Gazprom, the state-controlled energy conglomerate, was one of the Kremlin's most potent geopolitical weapons. But those days now seem like a distant memory: Gazprom is a financial shadow of its former self.

The speed of Gazprom's decline is breathtaking. At its peak in May 2008, the company's market capitalization reached $367.27 billion, making it one of world's most valuable companies, according to a survey compiled by the Financial Times. Gazprom's deputy chair, Alexander Medvedev, repeatedly predicted at the time that within a decade the Russian energy giant could be worth $1 trillion.

That prediction now seem foolhardy. Since 2008, Gazprom's value has plummeted. As of August 3, it had a market capitalization of $51.12 billion. A little over four years ago, in April 2011, the figure stood at $194.5 billion. No company among the planet's Top 5,000 has suffered a bigger collapse in market capitalization, according to Bloomberg Business News.

Indicators suggest Gazprom is nowhere near hitting bottom, and lingering uncertainty raises questions about its survivability. During the first two quarters of 2015, Gazprom's natural gas production fell by 12.9 percent. In addition, Russia's Ministry of Economic Development predicts that annual production will fall to 414 billion cubic meters (bcm), the lowest level in Gazprom's history, and well below the company's 2015 target of 485 bcm. Last year, production declined by 9 percent to 444 bcm, which, at the time, was the lowest on record. Industry experts forecast that production will remain low over the next few years.

Not only production is sagging, export revenues are also taking a big hit. During the first five months of 2015, export revenue shrank by 35.8 percent to $18.768 billion, according to Russia's Federal Customs Service. Last year, the company's net income plummeted by over seven times in ruble terms to 159 billion rubles from 1.139 trillion rubles in 2013, and by whopping 12.5 times in dollar terms to $2.8 billion from $34.8 billion in 2013.

So what happened? Why is the company with the largest proved oil and gas reserves among publicly traded energy giants, and operating in a country bordering on two of the world's top energy consumers – the European Union and China – performing so badly?

The Kremlin, which holds a controlling stake in Gazprom, tends to blame the sharp drop in oil prices and "warm winters." However, energy giants ExxonMobil and Petro China, Gazprom's financial contemporaries back in mid-2008, have remained top performers. As for falling demand in "warm winters," while Russian supplies to Western Europe shrank, Norway boosted its market share and, for the first time, significantly beat Russia – by more than 50 percent – in terms of supplies to this critical region in the last quarter of 2014 and first quarter of 2015, according to the latest data available.

Experts say that Gazprom's main problem is that it continues to serve as the Kremlin's favored geopolitical weapon, rather than be allowed to act as a purely commercial enterprise. President Vladimir Putin's administration keeps forcing the company to serve its political interests. Examples include Gazprom's purchase of major Russian media outlets that were then turned into Kremlin mouthpieces, bullying or buying the loyalty of neighboring states for Moscow's geopolitical benefit, and sponsoring the egregiously expensive Olympic Games in Sochi.

Gazprom's "plunge has become emblematic of the malaise that has overtaken President Vladimir Putin's economy," noted a commentary published by Bloomberg Business in 2014. Russia will finish 2015 as the second biggest loser in global economic growth, according to forecasts of economists surveyed by Bloomberg.

Most ominously for the company, the Putin administration still keeps pushing Gazprom to implement new projects that are "geopolitically important," but risky from a financial viewpoint. Two prominent examples of such projects concern Ukraine and China.

The Kremlin's sponsorship of separatists in eastern Ukraine has cost Gazprom dearly. Gazprom's exports to Ukraine fell from 36.4 bcm in 2010 to 3.7 bcm during the first six months of 2015, before stopping altogether on July 1. Moscow's efforts to effectively mount an energy blockade against Ukraine in 2014-2015 did not work, but ended up costing Gazprom close to $6 billion in lost revenue and fines, while pushing European customers to diversity their energy imports.

Moscow still wants to stop transit supplies of gas via Ukraine to Europe (or at least cut them from 60-62 bcm in 2014 to 10-30 bcm) by 2019. The alternative for Russia is to channel gas via Turkey and two new lines via the North Stream network. Analysts are not thrilled with these plans, seeing them as more about politics than economics.

The estimated construction costs for two new lines of North Stream stand at €9.9 billion ($10.9 billion), while the first of the total of four Turkish Stream lines could cost €3.3 billion ($3,6 billion). Thus, the total costs of the projects, without taking into account the likelihood of cost overruns, will reach about €23.1 billion ($25.4 billion).

Beyond the construction expenses, transit costs for North Stream appear to be significantly more expensive than shipping energy via Ukraine. Experts estimate that in 2014 Gazprom's transit costs per bcm via North Stream amounted to $43 compared to $33 via a Ukrainian route.

When it comes to Gazprom's commitments to Chinese exports, the news for the company may not be much better. Initially, when the $400-billion, 30-year deal was announced in May 2014, it was widely seen as a major geopolitical victory for Putin and Russia. But details of the agreement remain a secret, suggesting that there is little good news for Gazprom in it. The limited information that has emerged supports this assumption.

The project is expensive, with cost estimates ranging from $55 billion, as mentioned by the Kremlin, to $100 billion or more cited by Gazprom's specialists. In addition, Gazprom is reportedly obligated to cover the costs of building infrastructure to extract, process, store and deliver gas to China on its own. China was initially supposed to help out with a $25-billion payment, but it never happened. Meanwhile, Gazprom moved ahead with the project on borrowed money, increasing the price tag and risk. Adding to the risk is the fact that the project poses significant technological challenges, including difficult terrain along the planned route.

While it was initially announced that the deal could be worth upwards of $400 billion for Gazprom, Russian officials now estimate the deal could reap significantly less due to low oil prices. A benchmark barrel of oil cost roughly $100 at the time the deal was announced; these days the oil price is hovering in the $50-per-barrel range.

Analysts at Merrill Lynch estimate that Gazprom needs to sell gas to China at a price of $340-380 bcm to turn a small profit. Currently, however, Gazprom is receiving about $200 per bcm for its gas exports. For the third quarter, for example, Gazprom is charging Moldova a price of $210 per bcm. With revenue potentially falling to about $200 billion, and construction costs of $100 billion or more, the China deal could potentially turn toxic for Gazprom.

Overall, the price tag of the new geopolitically driven pipelines could exceed $125 billion, or about 2.5 times Gazprom's current market capitalization. Given the company's financial situation, Gazprom executives have a lot to worry about in the immediate future.