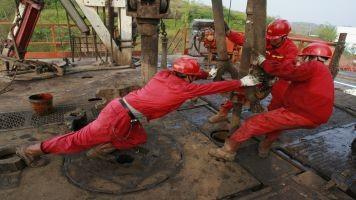 China may launch a global crude oil futures contract as early as October to compete with the existing London Brent and the U.S. WTI benchmarks, three sources said, as it pushes ahead with reforms to open up its oil markets.

The long-awaited crude contract would better reflect China's growing importance in setting crude prices, as well as boost the use of the yuan in which it will be traded, although volatile global trading conditions and China's recent interference in stock markets have raised some concerns.

The Shanghai International Energy Exchange, also known as INE, circulated a draft of the futures contract to market participants last month, saying the launch could happen as early as October, the sources who saw the draft, told Reuters.

China, the world's second-biggest oil consumer, has already begun to loosen its grip on the physical oil sector this year by granting quotas for imported crude to privately-owned refiners for the first time, surprising market participants with the speed of reform.

"The development of a futures market is closely linked to the physical market," INE said in a statement issued to Reuters in response to questions about the new contract.

"The more physical players participate, the better the liquidity of the futures market will be."

The launch of Shanghai crude futures won state approval last year and would be the first Chinese contract that allows direct participation by international investors.

A Shanghai-based contract will compete in the crude futures market, which is worth of trillions of dollars and is dominated by two contracts, London's Brent, seen as the global benchmark, and WTI, the key U.S. price.

Oil traders said Chinese crude futures would eventually compete against Brent, which is priced off small and declining oil fields in the British North Sea, and can be affected by factors with no relationship to Asia.

INE said that it aimed to have overseas investors, oil companies, and financial institutions participating in its crude futures trading.

Recent market interference was also a concern, although he noted China's iron ore and coal futures markets were running smoothly despite similar price routs to oil.

For futures to work, traders need a widely traded physical market from which prices for futures contracts can be derived.

"These changes are coming much faster than we anticipated," said an official with one of the big three state-owned energy companies. "Reforming and opening up the oil market is the new fashion in Beijing."

The government has so far granted a total of seven independent refiners quotas for 715,800 bpd of imported crude, roughly 11 percent of the total crude imports, and more are likely to follow.

"The liberalization of the Chinese oil market will provide more favourable market conditions for the launch of crude oil futures," INE said.

Given the reforms and increased competition, HSBC advised its clients to be "cautious towards the share price potential of China's oil majors."

Citi Group expects crude demand from the seven independent refineries to more than double to 815,000 barrels per day (bpd) by the end of 2015.

At least eight more refiners have already applied for quotas, and another 15 are expected to apply, the bank said.

"The private sector has grown in China not so much by privatisation, but by squeezing the state sectors so they become either better performing or irrelevant," he said.