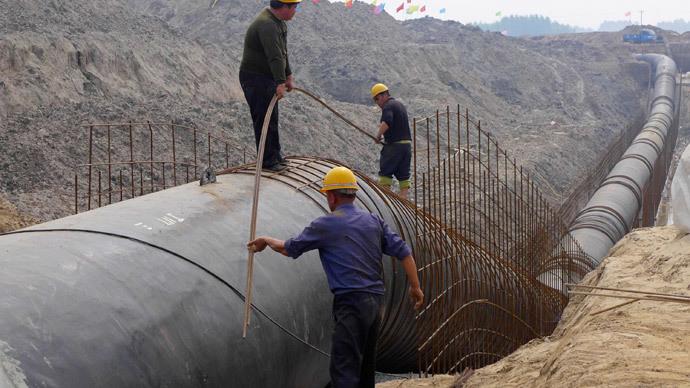 Alexey Miller, Chairman of the Gazprom Management Committee, and Wang Yilin, Chairman of the CNPC Board of Directors, signed a Memorandum of Understanding on the project for pipeline gas supply to China from Russia's Far East.

"The project for Russian gas supply from the Far East to China strengthens the strategic and mutually beneficial partnership between our companies," Alexey Miller commented on Thursday after the meeting.

According to Gazprom, the document reflects the parties' intent to set up a joint working group for conducting a research on the project for gas supply. The research results will determine the key technical and commercial parameters of the project, including terms of delivery as well as a gas delivery point.

"There is little doubt about it: Russians are looking to China, as they were looking at Germany and Italy a few years ago. They are diversifying their buyers, as Europe is trying to diversify its suppliers. The mechanisms are simple... It is seems Moscow is coming out on top. Russians have clear problems, but even clearer potentials" a source told Natural Gas Europe.

Meanwhile, in the last hours, other Russian companies flexed their muscles too.

"The achieved agreements are indicative of a special level of cooperation with our Chinese partners. Joining efforts will further improve efficiency of our work by developing cooperation in all areas including such strategically important projects as FEPCO" Chairman of Rosneft Management Board Igor Sechin commented on Thursday.

'Rosneft and China Petrochemical Corporation (Sinopec) signed the Heads of Agreement on cooperation within the proposed joint development of Russkoye and Yurubcheno-Tokhomskoye fields' reads a separate document.

A few hours before, on Wednesday, Magadanmorneftegaz, Lisyanskmorneftegaz (joint ventures of Rosneft and Statoil) and China Oilfield Services Limited (COSL) signed a contract to drill two exploration wells in 2016. The wells will be drilled in the Magadan-1 and Lisyansky areas of the Okhotsk Sea.

Also on Thursday, in the presence of the President of Russian Federation Vladimir Putin and the President of People's Republic of China Xi Jinping, Novatek and China's Silk Road Fund (SRF) concluded a framework agreement on the acquisition by SRF of a 9.9% equity stake in the Yamal LNG project.

"We consider Yamal LNG to be one of the most prospective and competitive LNG projects in the world. Such observation supports our interest in becoming its shareholder. We hope our entrance into the Project will facilitate an expedited closing of the Project's general external financing, as well as contribute to further development of the Chinese-Russian cooperation in the energy sector" Wang Yanzhi, President of Silk Road Fund, commented in a note published on Thursday.

According to the agreement, the transaction is scheduled to close after the satisfaction of stipulated conditions precedent, including the receipt of all necessary approvals. Following the completion of the deal, China would be the second stakeholder with a 29.9% interest.

OTHER FORMS OF COOPERATION?

Russia and China recently completed the largest combined naval exercise ever conducted between the two nations. Their joint naval exercises off the Russian Pacific coast - about 2,000 miles west of the Bering Sea - are a sign of expanding cooperation, which builds on stronger ties that have been expanding over the past decade. Moscow and Beijing are woking together in several sectors; military and energy-related sectors are the ones that keep making the headlines, but they are not the only ones.