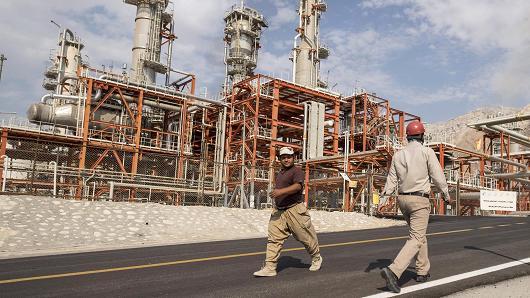 The rapid deterioration of relations between Iran and Saudi Arabia spells trouble for the energy market in general and for the development of Iran's gas industry in particular.

The immediate effects of the execution of the Shia cleric Sheikh Nimr al-Nimr in Saudi Arabia on 2 January and the subsequent torching of the Saudi embassy in Tehran will be felt in Syria and Yemen. In Syria, the two regional powers are already engaged in proxy warfare, with the Saudis working to secure the downfall of the Assad regime in Damascus and the Iranians to ensure its survival. In Yemen, Saudi forces are directly engaged in combatting the Iranian-backed Houthi forces who are in control of much of the country.

But it is in the energy field that the long term consequences will most keenly be felt. Tehran was looking to the nuclear development agreement it signed with the 5+1 group of great powers on 14 July to ensure the lifting of international sanctions and a fresh flow of foreign investment into its key oil, gas and industrial sectors.

However, the United States has always made clear that not all of its sanctions are related to the question of whether Iran was pursuing a nuclear weapons programme and, as a result of its close relations with Saudi Arabia, it is highly unlikely that US companies will either be willing or able to invest in Iran so long as the tension between Tehran and Riyadh remains close to boiling point.

European investors, although keener to secure a stake in Iranian oil and gas ventures than their US counterparts, will also want to take stock of what is happening in Iran, since few will want to commit to long-term investments in such a febrile atmosphere.

This will particularly hit Iran's gas sector. Despite Washington's concerns, the July agreement should at least mean that Iran's ability to sell its oil on international markets will improve steadily, and, in the short run at least, Iran can utilise indigenous resources to increase its oil production and thus its oil exports. Both countries, of course, stand to benefit from the rise in oil prices stemming from the latest tension - so long as the tension does not escalate from proxy war to direct military confrontation, thus threatening their core oil production and export facilities.

But gas development is a longer-term proposition. Compared to oil, gas generally yields less profits, requires more complex infrastructure to reach international markets, and takes longer to deliver results. Yet both Iran and Saudi Arabia are looking to secure a major expansion of gas production while Iran is also seeking a dramatic increase in export capacity.

Thus, on 18 November, Iranian Oil Minister Bijan Zanganeh said Iran, which holds the world's largest gas reserves, was aiming to double its gas production in the next 30 months and to raise its share of global cross-border gas trade from a minuscule one per cent at present to ten per cent at some unspecified future date. In production terms, this means increasing output from 172.6 bcm in 2014 (five per cent of the total world output) to around 350 bcm in 2018-19.

Even though domestic use (including the substitution of gas for oil wherever possible and greater reliance on gas injection to improve oil output levels) remains Tehran's priority, its export ambitions are still enormous. To secure a ten per cent share of the global export market, Iran will have to move from exports of just 9.6 bcm in 2014 (0.95% of global cross- border trade) to well over 100 bcm. In practice, allowing for a 10-year time frame to achieve its goal, between one-third and one-half of Iran's projected gas production increases will be required for export. That means the construction of gas liquefaction plants costing several tens of billions of dollars in initial investment and, as Zanganeh noted in November, that means "we surely need foreign investment for the implementation of LNG projects in the country."

As for Saudi Arabia, it may hold the world's fifth largest gas reserves (after Iran, Russia, Turkmenistan and the USA) but rapidly accelerating domestic demand means that even with production reaching 108.2 bcm in 2014 it still suffers from domestic supply shortfalls. In principle, Riyadh would still like to see foreign majors play a major role in finding and developing new gas resources. But the Natural Gas Initiative unveiled in 1998 failed to transform an initial interest from seven US majors into actual participation, whilst others who did subsequently take part in the search for new resources in the southeastern Empty Quarter, such as Shell, Total, Eni, Repsol (Spain) and Sinopec, have either withdrawn altogether or suspended active operations.

In the current climate of extremely strained Saudi-Iranian relations, with both nations increasing their direct engagement in wars in neighbouring states, the likelihood that major international companies will want to take any early decision on investing in gas development in either country looks increasingly remote - even if rising tension does contribute to a sustained recovery in global energy prices.