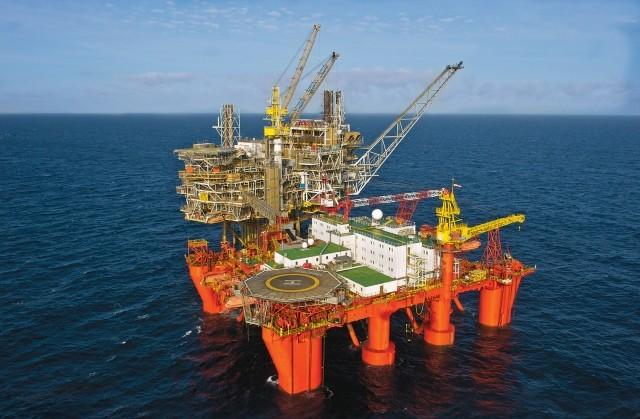 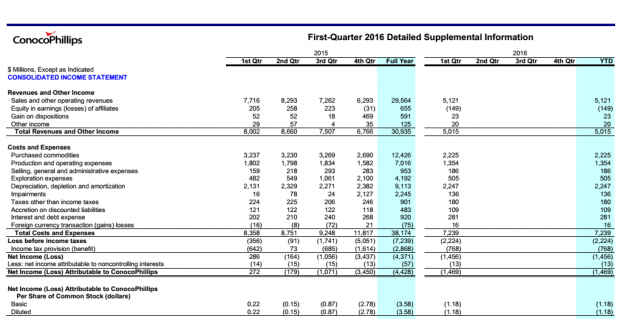 "We continue to safely deliver on our operational targets while taking steps to manage through this period of low prices," said Ryan Lance, chairman and chief executive officer. "During the quarter, we took actions to conserve cash, improve liquidity and position the company for strong performance as prices improve. We reduced our dividend, further reduced our 2016 capital expenditures guidance, raised low-cost debt and continued to improve our cost structure. These actions, in combination with ongoing strong execution of the business, allow us to deliver on our value proposition, which recognizes the importance of distributions to shareholders, disciplined capital allocation, a focus on returns and a strong investment-grade balance sheet. As challenging as this price downturn has been, we are a much stronger company for the long term."

Production for the first quarter of 2016 was 1,578 thousand barrels of oil equivalent per day (MBOED), a decrease of 32 MBOED compared with the same period a year ago. Normal field decline and impacts from dispositions exceeded growth from major projects and development programs, improved well performance, and the impact of lower prices on royalties and production sharing contracts. When adjusted for 66 MBOED from dispositions and downtime, production increased 34 MBOED, or 2 percent.

During the quarter, APLNG loaded 11 cargoes from Train 1 in Australia. Lower 48 transitioned from 13 operated rigs at year-end 2015 to three operated rigs in April. Drilling continued at CD5 and Drill Site 2S in Alaska with production continuing to ramp up from both projects. In the Gulf of Mexico, the Melmar exploration well was plugged and abandoned as a dry hole. The exploration and appraisal program continues in Senegal.

Adjusted earnings were lower compared with first-quarter 2015 primarily due to lower realized prices, partially offset by lower operating costs. The company's total realized price was $22.94 per barrel of oil equivalent (BOE), compared with $36.92 per BOE in the first quarter of 2015, reflecting lower average realized prices across all commodities.

Operating costs for the quarter were $1.69 billion compared with $2.13 billion in the first quarter of 2015. Adjusted for $0.12 billion pre-tax of 2016 special items from pension settlement expense and inventory write-downs in the Gulf of Mexico, as well as $0.1 billion pre-tax from restructuring costs in 2015, operating costs were reduced by 23 percent, or $0.46 billion, compared with first-quarter 2015.

For the quarter, cash provided by operating activities was $0.4 billion. Excluding a $0.3 billion change in operating working capital, ConocoPhillips generated $0.7 billion in cash from operations. In addition, the company funded $1.8 billion in capital expenditures and investments, received proceeds from asset dispositions of $0.1 billion, paid dividends of $0.3 billion, and increased debt by $4.5 billion.

The company has reduced its 2016 capital expenditures guidance from $6.4 billion to $5.7 billion, primarily driven by reduced deepwater exploration activity, deferrals and lower costs across the portfolio.