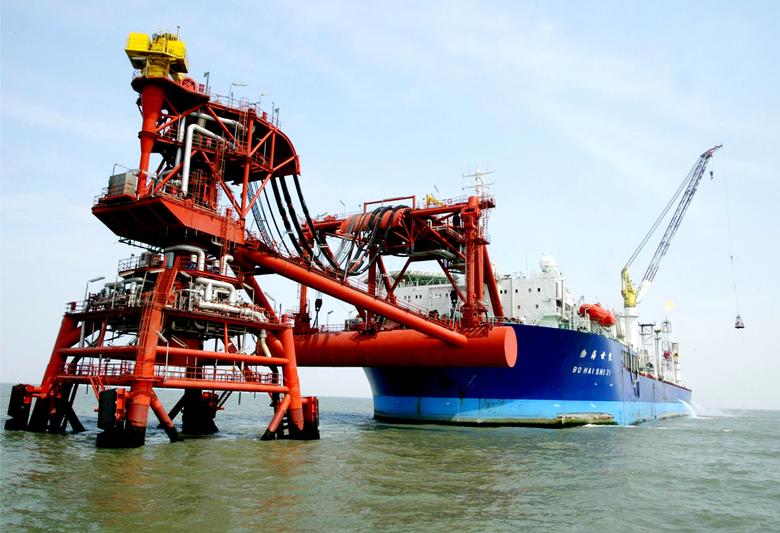 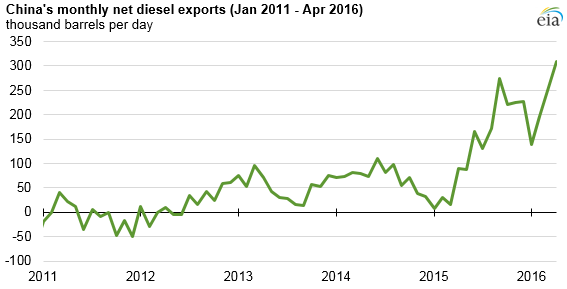 Chinese exports of diesel began to increase rapidly in 2015, driven by a structural shift in China's economy—which is reducing diesel demand—and by reforms in China's refining sector, which are contributing to increased refinery utilization and diesel production. These two factors have pushed Chinese net diesel exports higher, to more than 300,000 barrels per day in April.

Current low prices in global diesel markets can be attributed to slow demand growth, high inventories as a result of reduced winter heating demand in the United States and Europe, and from new or expanded refinery capacity in the Middle East designed to maximize diesel production. Particularly relevant to the Asia-Pacific market is the emergence of China as a growing net exporter of diesel. China was a key driver of diesel demand growth over the past several decades but is now a net diesel exporter, contributing to the growing oversupply in global diesel markets.

China's economy is gradually shifting from heavy manufacturing to commercial services and personal domestic consumption. As part of this transition, demand for gasoline and jet fuel has grown more than the demand for diesel. Chinese refineries—which tend to have high diesel yields—increased refinery runs to meet demand for gasoline. Slower demand growth for diesel combined with increased coproduction of diesel has resulted in high inventories and increased supply in China.

China is currently reforming its refining sector by liberalizing import and export restrictions on crude oil and petroleum products. This reform allows increased competition in the domestic transportation fuels market.

Refining crude oil instead of fuel oil allows the independent refineries to improve efficiency and to produce a slate of higher-value products, such as gasoline and jet fuel. Higher output of these products is increasing competition with the SOE refineries and decreasing SOE market share in regions with independent refineries. The supplies of diesel produced at SOE refineries, which would normally have been delivered to serve those regions, must now find alternative markets through exports. To alleviate the over-supply situation, China began to increase the export quota for all petroleum products in 2015, with the most recent quota announcements for 2016 at double the amount allowed during the same period last year.