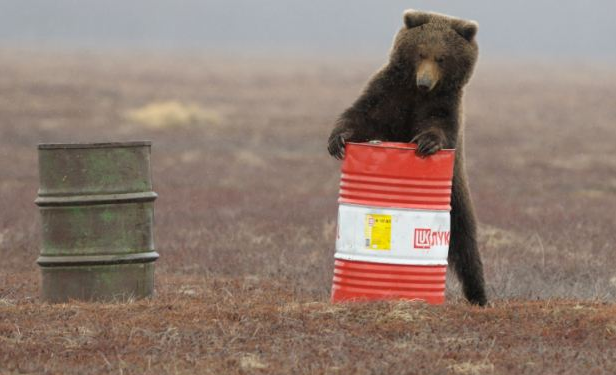 According to EIA, The Russian economy, already weakened by the imposition of Ukraine-related sanctions by the United States and the European Union, has been further damaged by low crude oil prices since the end of 2014. In 2015, Russia was the world's second-largest producer of petroleum and natural gas, and the oil and natural gas sector accounted for approximately 8% of Russia's gross domestic product (GDP), according to IHS Markit. However, in conjunction with both lower oil prices and international sanctions, Russia has recently experienced five consecutive quarters of decline in GDP, representing that country's deepest economic downturn since 2008-09. While consumers in many countries are benefiting from lower oil prices, declines in Russian economic activity are also having an adverse effect on economic growth in many neighboring countries by reducing remittances from migrant populations working in Russia.

Approximately 8% of the Russia's total inhabitants are migrants (foreign-born populations) according to the United Nations Population Division,1 with the vast majority of migrants coming from Eastern Europe and Central Asia according to the most recent World Bank statistics. These migrants often send a portion of their earnings back to their families or other residents in their country of origin, which are referred to as personal remittances. In some developing countries, remittances are a significant source of purchasing power. Under such circumstances, slower growth or outright declines in remittances can negatively affect the economies of countries dependent on them and, in turn, potentially slow their oil consumption growth. 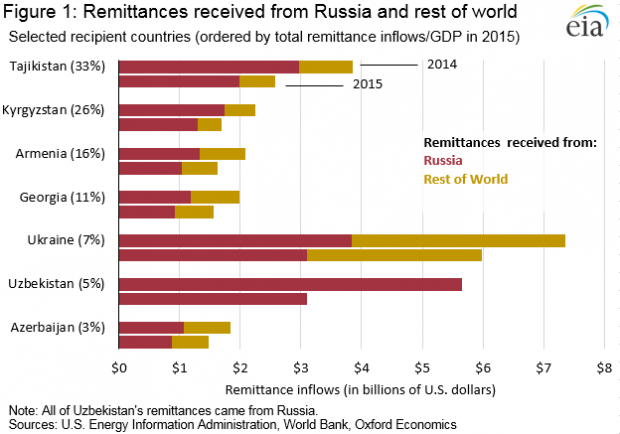 In addition to the effects that lower economic activity in Russia may have had on the job prospects of migrants and the amount of money they earned in 2015, the severe depreciation of the Russian ruble (RUB) reduced the value of remittances sent from Russia. Because crude oil is priced globally in USD, low crude oil prices can affect exchange rates between the USD and the free-floating currencies of some oil-producing nations, reducing the value of remittances in USD terms. From 2014 to 2015, the average annual USD-RUB exchange rate rose from RUB 38.6 to RUB 61.3 (Figure 2), amounting to a 59% depreciation in the RUB, the largest since 1999. 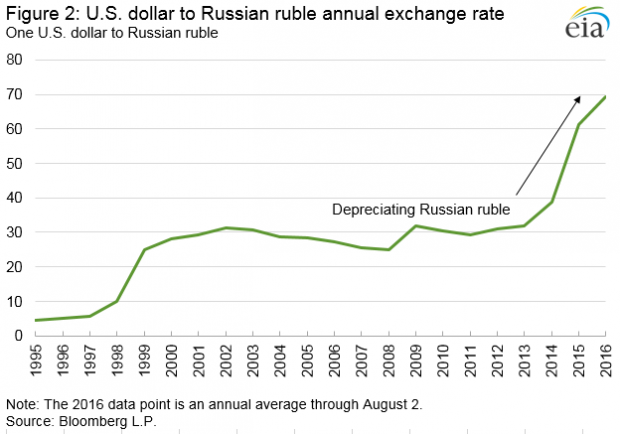 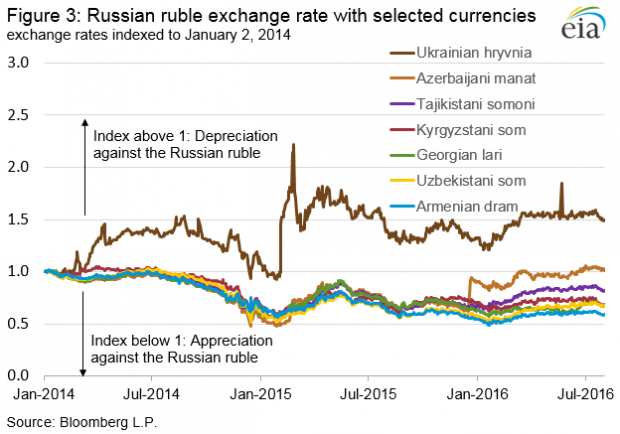 In addition to reducing economic activity, declines in remittances can affect a country's oil consumption, which is often sensitive to the level of income received from both domestic and international sources. Annual oil consumption across the seven countries that receive most of their remittances from Russia grew by an estimated 18% in 2014 and then declined by about 1% in 2015.

The International Monetary Fund's Regional Economic Outlook for the Caucasus and Central Asian region, which includes six of the seven countries, cites weakness in the Russian economy and the drop in remittance inflows among the reasons why the region's GDP growth in 2016 is projected to be the lowest in two decades. In addition, some countries in this region are also major oil producers, like Azerbaijan, which has more directly been economically affected by both low crude oil prices and declining crude production.

Russia's economy is still projected to contract in 2016, although at a lower rate of -1%, according to Oxford Economics. Brent monthly average spot crude oil prices have risen after reaching a 12-year low in January, which may help to limit Russia's expected budget deficit in 2016. The depreciation of the RUB against the USD has moderated in 2016 compared with the depreciation that occurred from 2014 to 2015. As the Russian economy begins to stabilize and expand in the coming years, remittance inflows to Eastern European and Central Asian countries may increase and strengthen the region's economic growth, and potentially its oil consumption.