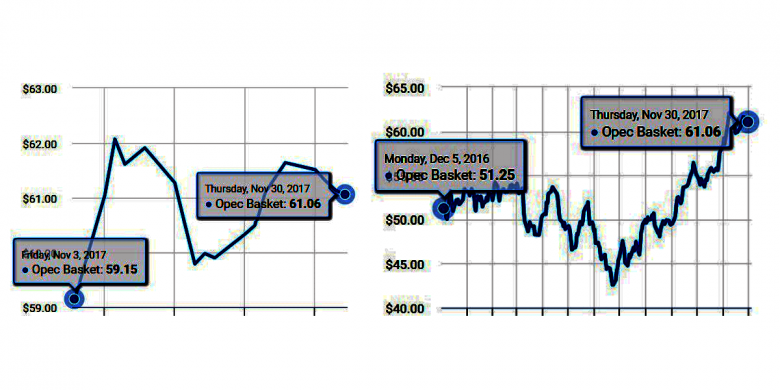 OPEC - The 173rd Meeting of the Conference of the Organization of the Petroleum Exporting Countries (OPEC) was held in Vienna, Austria, on Thursday, 30 November 2017, under the Chairmanship of its President, HE Khalid A. Al-Falih, Minister of Energy, Industry and Mineral Resources of Saudi Arabia, and Head of its Delegation.

The Conference thanked their predecessors in office: HE Noureddine Boutarfa from Algeria, a key architect of the decision taken in Algiers in September 2016 that laid the foundation for the 'Declaration of Cooperation'; HE José Maria Botelho de Vasconcelos, who had ably and diligently led the Angolan delegation since October 2008; and HE Dr. Nelson Martinez and Eng. Eulogio Del Pino, who have both served this year on the Joint Ministerial Monitoring Committee (JMMC). The Conference extended their deep appreciation for the contribution each had made to the work of the Organization.

The Conference warmly welcomed Mustafa A. Sanalla, Libya's NOC Chairman, as well as observers from non-OPEC, His Excellency Eng. Tarek El Molla, Egypt's Minister of Petroleum and Mineral Resources, and Mr. Japarguly Orazov, Vice-Chairman of the Turkmen Oil State Concern. The Conference reiterated the value it places on continued dialogue and cooperation with fellow oil producing nations to help achieve stability in the oil market.

The Conference reviewed the Secretary General's report, the progress made in the historic 'Declaration of Cooperation', as well as the report and recommendations made by the JMMC, whose work was supported by the Joint Technical Committee (JTC) and the OPEC Secretariat, and which was set up to monitor conformity to the voluntary production adjustments made by the 24 OPEC and non-OPEC participating nations. Furthermore, the Conference considered the report of the Economic Commission Board, as well as various administrative matters.

The Conference took note of oil market developments since it last met in Vienna on 25 May 2017, and reviewed the oil market outlook for the remainder of 2017 and 2018. It observed that global economic growth forecasts had improved since May, with expectations for both 2017 and 2018 now at 3.7%. In addition, global oil demand has been robust with upward revisions since May, with oil demand growth now standing above 1.5 million barrels a day (mb/d) for both 2017 and 2018.

It is also evident that the market rebalancing has gathered pace since May, with the OECD stock overhang falling to around 140 million barrels (mb) above the five-year average for October, a drop of almost 140 mb since May. Moreover, crude in floating storage has also fallen significantly over this period. Despite this success, the Conference reiterated that it was vital that stock levels be drawn down to normal levels.

In line with the decisions taken at its 171st and 172nd Meetings, the Conference decided to amend its production adjustments to take effect for the whole year of 2018 from January to December 2018, while assuring full and timely conformity.

In view of the uncertainties associated mainly with supply and, to some extent, demand growth, it is intended that in June 2018, the opportunity for further adjustment actions will be considered based on prevailing market conditions and the progress achieved towards rebalancing of the oil market at that time.

In agreeing to this decision, Member Countries confirmed their continued focus on a stable and balanced oil market, in the interests of both producers and consumers. Member Countries remain committed to being dependable and reliable suppliers of crude and products to global markets.

The Conference thanked all OPEC Member Countries, as well as non-OPEC countries participating in the 'Declaration of Cooperation', for their commitment, as reflected in the unprecedented conformity levels to the voluntary production adjustments.

The Conference extended its deep appreciation to the JMMC, the JTC and the OPEC Secretariat for their continuous and valuable engagement in providing the transparency required to achieve the full and timely implementation of the 'Declaration of Cooperation'.

The Conference also acknowledged the crucial role played by participating non-OPEC countries in the 'Declaration of Cooperation'. In this regard, it stressed the importance of the 3rd OPEC and non-OPEC Ministerial Meeting that would take place later in the afternoon of 30 November 2017 at the OPEC Secretariat.

The Conference also welcomed the positive dialogue and technical interactions that have evolved among all Parties to further institutionalize the 'Declaration of Cooperation'. This includes recent workshops related to COP 23, US tight oil prospects, as well as the 2nd OPEC Technical Meeting of OPEC and non-OPEC Producing Countries on 27 November.

The Conference elected HE Suhail Mohamed Al Mazrouei, the UAE's Minister of Energy as President of the Conference for one year, with effect from 1 January 2018, and HE Major General Manuel Quevedo, the Minister of Petroleum and Energy of the Bolivarian Republic of Venezuela as Alternate President, for the same period.

The Conference paid a glowing tribute to the outgoing President of the Conference, HE Khalid A. Al-Falih, and the Chair of the JMMC in 2017, HE Issam A. Almarzooq, for their exemplary leadership and the major contributions they have made to the success of the 'Declaration of Cooperation'.

The Conference decided that its next Ordinary Meeting will convene in Vienna, Austria, on 22 June 2018.

The Conference expressed its continued sincere gratitude to the Government and to the people of the Republic of Austria, as well as the authorities of the City of Vienna, which has hosted over 100 OPEC Ministerial Conferences, for their warm hospitality and excellent arrangements for the Meeting.