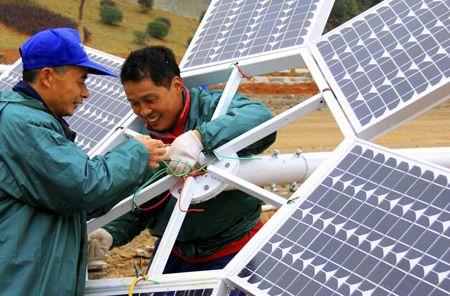 REUTERS - China will launch the trading of green certificates for solar and wind power on July 1 in a bid to help reduce government subsidies to the renewables sector, the National Development and Reform Commission (NDRC) said.

In a pilot program, the NDRC said solar and wind producers would be issued tradeable certificates, proving that electricity has been generated through renewable energy sources.

Renewable energy users such as private and state businesses would be encouraged to buy the certificates, which would then entitle them to an unspecified payment. Each certificate would represent 1 megawatt hour of power, the NDRC said.

Solar and wind power producers who had sold their certificates would no longer receive a direct subsidy for electricity production, it said, without giving further details.

The NDRC said it would monitor the pilot program and could launch a mandatory green certificate scheme in 2018.

The NDRC said the change reflected the decreasing cost of renewable energy production and would reduce the burden of state investment in the sector.