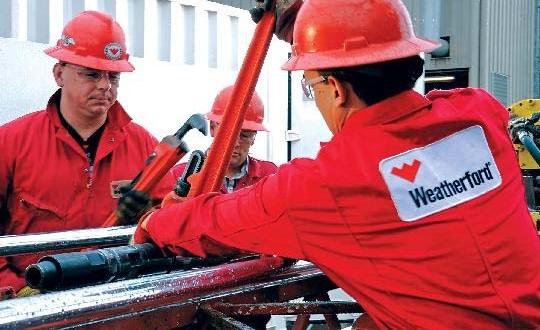 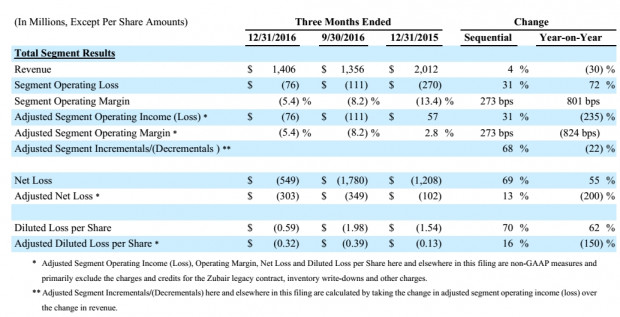 • Operating margins improved by 273 basis points sequentially , with 68% incrementals; and

Krishna Shivram, Chief Executive Officer , stated, "During 2016, we took the necessary steps to secure our liquidity and provide a runway from which the Company can become consistently profitable and free cash flow positive. We also removed a significant level of fixed costs, while still achieving the best safety record in the company' s history and measurably improving our service quality and performance.

I am pleased with our fourth quarter results. Revenue grew by 4% sequentially , despite approximately $40 million of lost revenue as we idled our U.S. pressure pumping business during the quarter . Sequential operating income incrementals were 68%, easily exceeding our targeted 50%. Excluding the land drilling rig business, revenue grew 4% with operating income incrementals of 73%, clearly exhibiting the power of increased revenue spread over a low and efficient fixed cost base.

North America revenue grew 8% and would have increased 17%, if we continued our pressure pumping activities for the full quarter.

Both the U.S. and Canada grew strongly on land while offshore Gulf of Mexico weakened. Incrementals in North America were 104% as we removed costs throughout the fourth quarter . Operating losses in North America were $58 million including a loss of $29 million related to the pressure pumping business, which would have been negatively impacted by another $20 million had this business continued through the quarter .

Eastern Hemisphere revenue grew 4% sequentially with 168 basis point margin improvement and 39% incrementals. Product sales were approximately $40 million higher than the normal quarterly level. The North Sea and Russia experienced a seasonal slowdown. SubSahara Africa activity declined in Angola and Nigeria while Asia-Pacific benefited from product sales in Australia and Malaysia. The Middle East/North Africa region was positively impacted by higher product sales as well as the start-up of activities on several of the service contracts won over the last six months. We expect to start-up on the remaining service contracts in early 2017.

Free cash flow from operations was $171 million, driven by working capital improvements, and after successful debt and equity raises totaling $996 million during the quarter, net debt was reduced by $507 million to $6.5 billion."

Shivram continued, "After a protracted period of relentless cost structure transformation, implementation of disciplined financial metrics and the overall realignment of our Company, Weatherford is now well positioned with a streamlined portfolio to make material progress in operating results and to deleverage our balance sheet.

As supply and demand fundamentals continue to steadily improve, we stand at the beginning of a multi-year cycle of increased spending by our customers, almost entirely focused on developing mature reservoirs, principally on land. We are perfectly aligned to benefit from the attributes of this kind of cycle as it plays to our strengths on land in Well Construction, Completions and Artificial Lift.

We are now emerging from the downturn as a much stronger organization. With a transformed cost structure, and a much-improved balance sheet, we are committed to delivering the difference for our clients through innovation, collaboration and fit-for-purpose solutions.

Our focus is centered on service quality , safety , customer engagement, talent management and further strengthening a culture of accountability . As we execute on this 'Back to the Basics' strategy , we expect stronger financial results will naturally follow ."

After-tax charges, net of credits, of $246 million for the fourth quarter include:

• $125 million in severance and restructuring charges;

• $28 million in other charges and credits;

• $16 million of income related to the fair value adjustment of our outstanding warrants.