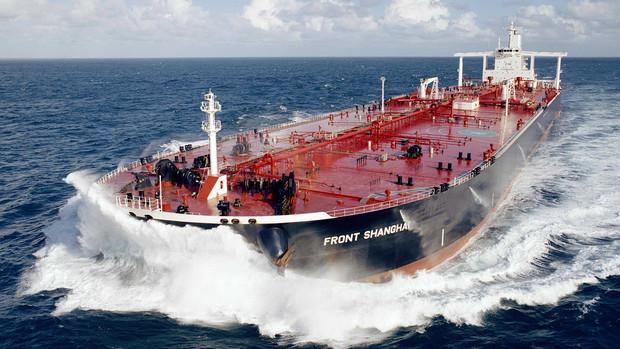 China's crude oil imports increased by 2.2 million b/d between 2012 and 2016, with the non-OPEC countries' share increasing from 34% to 43% over the period (Figure 1). Since the beginning of 2012 through February 2017 (the latest month for which data are available), the market shares of three of the top four OPEC suppliers to China (Saudi Arabia, Angola, and Iran) fell when measured using rolling 12-month averages. Over the same period, however, market shares for China's top four non-OPEC suppliers (Russia, Oman, Brazil, and the United Kingdom), increased. While still comparatively small as a share of China's crude oil imports, imports from Brazil reached a record high of 0.6 million b/d in December 2016, while imports from the United Kingdom reached their all-time high of 0.2 million b/d in February 2017. 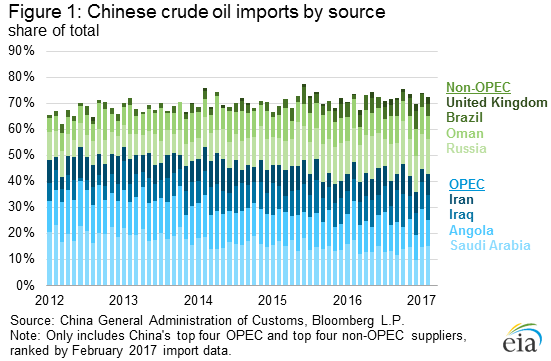 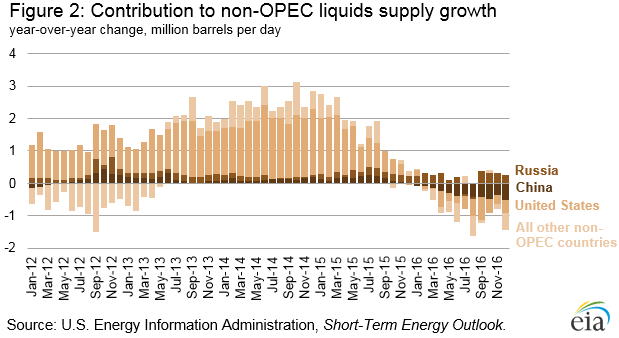 China's demand growth has remained the world's largest in every year since 2009, including an increase of 0.4 million b/d in 2016. As China increased its imports to address a growing gap between its domestic production and demand, it surpassed the United States as the world's largest net importer of total petroleum in 2014. Other factors contributed to an increase in Chinese crude oil imports. For example, in July 2015, the Chinese government began allowing independent refiners (those not owned by the government) to import crude oil. The independent refiners previously had restrictions on the amount of crude oil they could import and relied on domestic supply and fuel oil as primary feedstocks. A second factor was the Chinese government's filling of new Strategic Petroleum Reserve sites.

Total Chinese crude oil imports reached an all-time high of 8.6 million b/d in December 2016, with January and February 2017 data showing record highs for those particular months, at a time when demand is usually lower because of shutdowns related to the Chinese New Year (Figure 3). 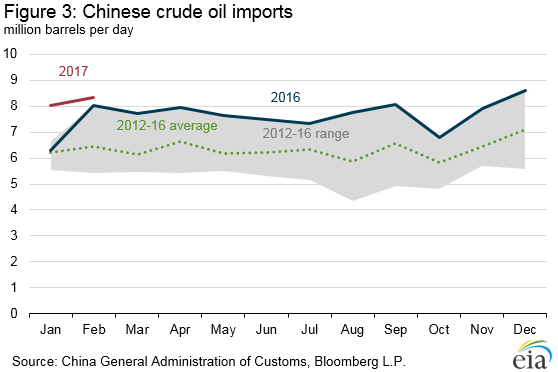 Recent market dynamics suggest the market share of non-OPEC suppliers in China may continue to grow as its imports increase and the country remains a competitive market for suppliers. The Brent-Dubai Exchange of Futures for Swaps (EFS), an instrument that allows trade between the Brent futures market and the Dubai swaps market and represents the price premium of Brent over Dubai crude oil, is at the lowest levels for this time of year since 2010 (Figure 4). The relatively low price of Brent crude oil allows long distance arbitrage opportunities for some suppliers, particularly producers in the Atlantic basin market. For Chinese refiners, purchasing crude oil from Atlantic basin producers is generally more expensive because of higher transportation costs. The relatively lower price of Brent crude oil, however, allows some Chinese refiners to purchase Atlantic basin grades less expensively than Middle Eastern grades, even after the cost of shipping. Producers in Brazil, the United Kingdom, and, increasingly, the United States have taken advantage of this arbitrage, boosting flows of non-OPEC oil into China. The March edition of EIA's monthly Short-Term Energy Outlook (STEO) forecasts a 0.3 million b/d increase in China's total liquid fuels demand in both 2017 and 2018. 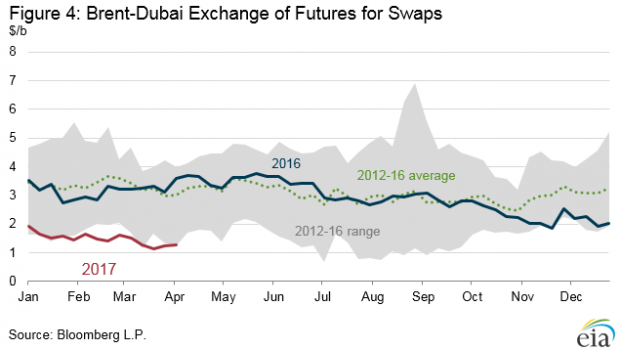