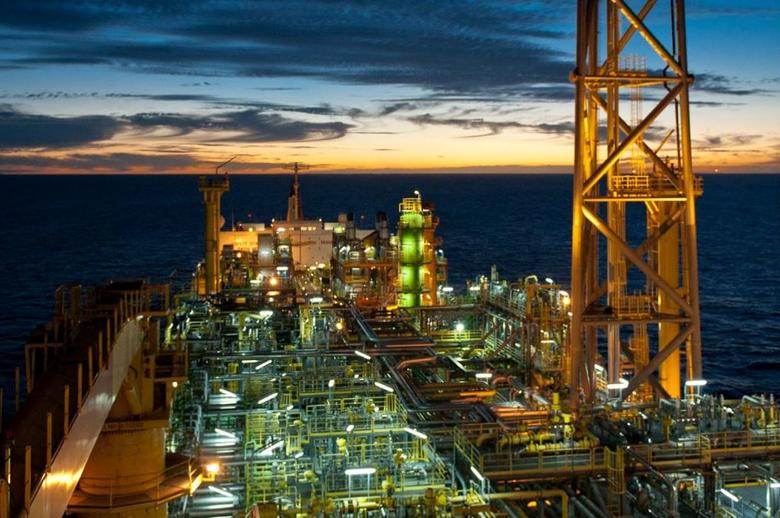 EXXON - Exxon Mobil Corporation today announced estimated first quarter 2017 earnings of $4 billion, or $0.95 per diluted share, compared with $1.8 billion a year earlier, resulting from improvements in commodity prices, cost management and refining operations. “Our results reflect an increase in commodity prices and highlight our continued focus on controlling costs and operating efficiently,” said Darren W. Woods, chairman and chief executive officer. “We continue to make strategic acquisitions, advance key initiatives and fund long-term growth projects across the value chain.” Upstream volumes were 4.2 million oil-equivalent barrels per day, a decline of 4 percent compared with the prior year, primarily due to the impact of lower entitlements due to increasing prices, and higher maintenance. Upstream earnings of $2.3 billion improved on higher liquids and gas realizations. Downstream earnings of $1.1 billion benefited from increased refinery throughput. Chemical earnings of $1.2 billion were impacted primarily by lower margins. Capital and exploration expenditures totaled $4.2 billion as the company advanced investments across its integrated businesses. During the quarter, the corporation distributed $3.1 billion in dividends to shareholders. 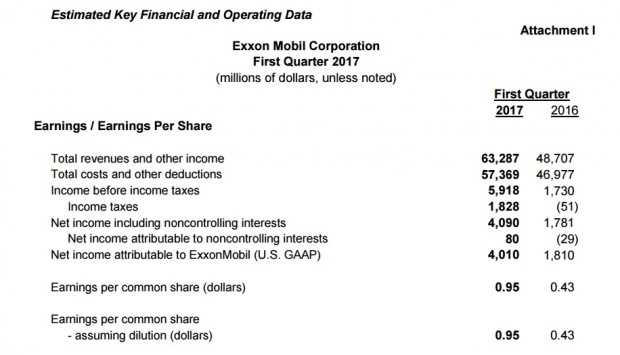 • Cash flow from operations and asset sales was $8.9 billion, including proceeds associated with asset sales of $687 million.

• Capital and exploration expenditures were $4.2 billion, down 19 percent from the first quarter of 2016.

• The corporation distributed $3.1 billion in dividends to shareholders.

• During the quarter, ExxonMobil completed the acquisitions of InterOil Corporation and companies with oil and gas properties primarily in the Permian Basin.

• ExxonMobil and Eni S.p.A. signed a sale and purchase agreement to enable ExxonMobil to acquire a 25 percent indirect interest in the natural gas-rich Area 4 block, offshore Mozambique, for approximately $2.8 billion. The acquisition will be completed following satisfaction of a number of conditions precedent, including clearance from regulatory authorities.

• ExxonMobil launched Mobil 1 Annual Protection, which offers consumers the convenience of driving one full year or up to 20,000 miles between oil changes. Mobil 1 Annual Protection has been specifically formulated to offer maximum wear protection, as well as increase resistance to oil breakdown and protect engine parts from harmful sludge and deposits, resulting in extended engine life.

On an oil-equivalent basis, production decreased 4 percent from the first quarter of 2016. Liquids production of 2.3 million barrels per day decreased 205,000 barrels per day due to lower entitlements and higher maintenance activity mainly in Canada and Nigeria. Natural gas production of 10.9 billion cubic feet per day increased 184 million cubic feet per day from 2016 as project ramp-up was partly offset by field decline.

During the first quarter of 2017, Exxon Mobil Corporation purchased 6 million shares of its common stock for the treasury at a gross cost of $496 million. These shares were acquired to offset dilution in conjunction with the company’s benefit plans and programs. The corporation will continue to acquire shares to offset dilution in conjunction with its benefit plans and programs, but does not currently plan on making purchases to reduce shares outstanding. During the quarter, the company issued a combined 96 million shares of common stock to complete the acquisition of InterOil Corporation and the acquisition of entities that own oil and gas properties located primarily in the Permian Basin.