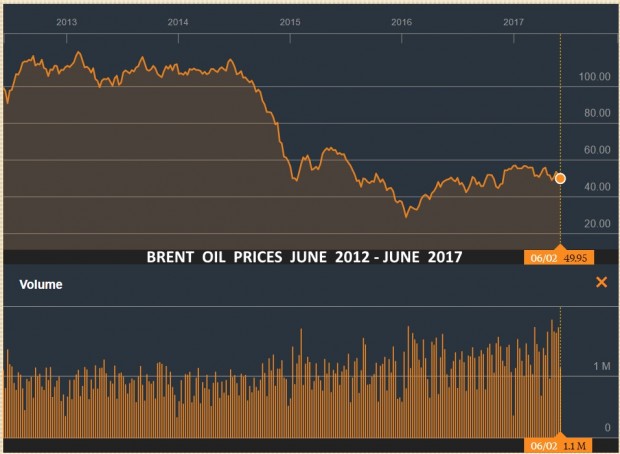 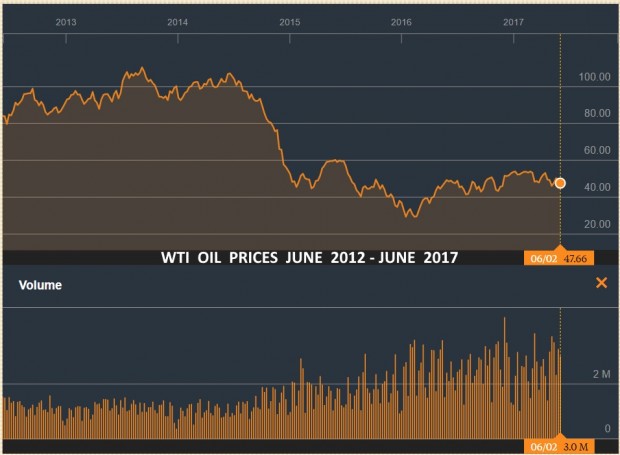 BOE - As oil prices sag despite OPEC's renewed efforts to shore up world crude markets, Wall Street banks have more bad news for the producer group: the outlook for next year isn't great either.

Oil futures have lost 8 percent since the Organization of Petroleum Exporting Countries and its allies agreed on May 25 to keep output constrained through the first quarter of 2018 in a bid to clear a global glut. While Goldman Sachs Group Inc. expects their strategy to ultimately succeed, they warn the surplus may re-appear once the curbs end. Morgan Stanley and JPMorgan Chase & Co. say the group will have little choice but to stick with the cuts even longer.

Resurgent supplies from U.S. shale drillers and fading growth in fuel demand mean that world oil markets could face another overhang next year, the banks predict. That means Saudi Arabia and Russia, the two biggest producers in the 24-nation coalition, may need to deliver on their promise to do "whatever it takes" to restore equilibrium.

"If OPEC wants to keep the market balanced next year, they will probably need to extend the production cut to all of 2018," Martijn Rats, managing director at Morgan Stanley in London, said by email. "Demand growth has slowed somewhat recently, and with U.S. production growing strongly, there doesn't seem to be much room for OPEC production to grow in 2018."

Production cuts are taking longer than expected to eliminate the surplus as U.S. shale drillers boost production with surprising speed. American oil explorers, having learned to operate more efficiently during a two-year market slump, have restored almost all the output lost during the downturn. As a result, the market may be unable to absorb the return of production halted by OPEC and its partners when their pact ends in April.

"The market isn't able to see how OPEC exits production cuts without creating huge surpluses in 2018," said Jeff Currie, head of commodities research at Goldman Sachs in New York. "We see risks for a renewed surplus later next year if OPEC and Russia's production rises to their expanded capacity and shale grows at an unbridled rate."

Still, even if a surplus re-emerges in 2018, OPEC's current efforts to deplete stockpiles will make their task of managing it easier, according to Citigroup Inc.

While shale's recovery means next year's supply situation "looks weighty," OPEC's output cuts now mean that if inventories accumulate again, it would be from a lower level, said Ed Morse, head of commodities research at Citigroup in New York.

Those increases in inventories may nonetheless prove substantial enough to prevent prices gaining, said David Martin, an analyst at JPMorgan, who slashed his 2018 forecast for Brent crude by $10 a barrel to $45 on May 25. Brent traded near $49 a barrel on the ICE Futures Europe exchange in London on Friday.

Even if OPEC extends their output accord for all of next year, it may only succeed in stopping further stockpile increases, he said.

"OPEC may be shackled to its deal for a long time," said Martin.

WIND ENERGY FOE CHILE 980 MW
The US$700m project, which is expected to generate 2 TWh/year, will include 140 turbines with a maximum power of 7 MW.
English

EUROPEAN CLIMATE ADAPTATION
Adaptation measures include flood prevention measures and renovating buildings to make them more resilient to extreme temperature. The changes required vary across the continent, but recent events have shown that climate change poses a threat to Europe’s cities.
English

GAS IS A KEY
Despite adaptations of new fuels and technologies to help achieve the net-zero goal, natural gas will continue to play a vital function for the foreseeable future.
English
All Publications »
Feedback: