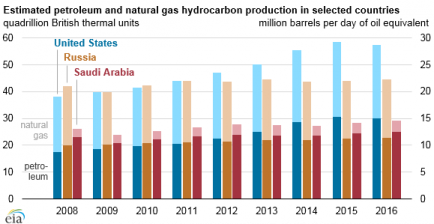 EIA - Natural gas net imports (imports minus exports) set a record low of 685 billion cubic feet (Bcf) in 2016, continuing a decline for the 9th consecutive year. In recent years both U.S. natural gas production and consumption have increased, although production has grown slightly faster, reducing the reliance on natural gas imports and lowering domestic prices. Based on preliminary data, 2016 domestic dry natural gas production was 26,459 Bcf, a 2% decrease from the record level of 27,060 Bcf set in 2015, but more than 40% higher than production levels 10 years ago. Preliminary data for 2016 show record total natural gas consumption of 27,495 Bcf, mostly as a result of increases in the electric power sector.

Natural gas exports continued to grow; U.S. exports in 2016 were more than three times larger than the level 10 years ago. Infrastructure improvements, including natural gas pipelines and facilities for liquefying natural gas for export, assisted suppliers in meeting increased demand from foreign markets. The United States is expected to become a net exporter of natural gas on an average annual basis by 2018.