"Our diversified portfolio of high-quality, low risk energy infrastructure assets continued to perform very well in the second quarter of 2017," said Russ Girling, TransCanada's president and chief executive officer. "Comparable earnings per share increased 46 per cent compared to second quarter 2016 primarily due to the Columbia acquisition in July 2016 and the realization of associated synergies, strong performance across our Natural Gas and Liquids Pipelines businesses and higher earnings from Bruce Power following a major planned outage in second quarter 2016. The growth in earnings was accompanied by a significant increase in net cash provided by operations which rose to $1.4 billion from $1.1 billion in the same period last year."

"In the quarter, we added $2 billion of additional expansion projects on the NGTL System and today announced a $0.2 billion expansion on the Canadian Mainline, highlighting the organic growth opportunities that continue to emanate from our broad, strategically located asset base. We are now advancing a $24 billion near-term capital program that is expected to generate significant growth in earnings and cash flow and support an expected annual dividend growth rate at the upper end of an eight to 10 per cent range through 2020," added Girling. "To date we have invested $9.0 billion in these projects and are well positioned to both execute and fund the remainder of the program over the next few years. In addition, we concluded the sale of our U.S. Northeast merchant generation facilities, with proceeds used to fully retire the Columbia acquisition bridge facilities. With those sales complete, over 95 per cent of our future EBITDA is expected to be derived from regulated or long-term contracted assets."

"We also continue to progress a number of additional medium to longer-term organic growth opportunities in our three core businesses of natural gas pipelines, liquids pipelines and energy in Canada, the United States and Mexico. Success in advancing Keystone XL or other growth initiatives, including the Bruce Power life extension, could further augment or extend the Company's dividend growth outlook," concluded Girling.

◦ Net income attributable to common shares of $881 million or $1.01 per share

◦ Comparable distributable cash flow of $936 million or $1.08 per common share

• Declared a quarterly dividend of $0.625 per common share for the quarter ending September 30, 2017

• In April, closed the sale of TC Hydro for US$1.07 billion and in June completed the sale of Ravenswood, Ironwood, Ocean State Power and Kibby Wind for US$2.029 billion. The proceeds from the sales were used to fully retire the acquisition bridge facilities which partially financed the Columbia acquisition

• Raised $1.5 billion in gross proceeds through a Canadian offering of Junior Subordinated Notes maturing in 2077

• Established an At-The-Market (ATM) program that allows us to issue up to $1 billion in common shares from time to time over a 25-month period, at our discretion, at the prevailing market price when sold in Canada or the United States. The ATM program will be activated at our discretion, if and as required, based on the spend profile of TransCanada's capital program and relative cost of other funding options

• In July, launched an open season to solicit additional binding commitments from interested parties for transportation of crude oil on the Keystone Pipeline and for the Keystone XL Pipeline project from Hardisty,  Alberta to markets in Cushing, Oklahoma and the U.S. Gulf Coast

• On July 25, 2017, we were notified that Pacific NorthWest (PNW) LNG would not be proceeding with their proposed LNG project. As part of our Prince Rupert Gas Transmission (PRGT) agreement, following receipt of a termination notice, we would be reimbursed for the full costs and carrying charges incurred to advance the PRGT project. We expect to receive this payment later in 2017

• On July 28, announced a $0.2 billion expansion project on the Canadian Mainline in southern Ontario Net income attributable to common shares increased by $516 million to $881 million or $1.01 per share for the three months ended June 30, 2017 compared to the same period last year. Net income per common share in 2017 includes the dilutive effect of issuing 161 million common shares in 2016. Second quarter 2017 results included a $265 million after-tax net gain on the monetization of the U.S. Northeast power assets which was comprised of a $441 million aftertax gain on the sale of TC Hydro and an incremental loss of $176 million after-tax on the sale of the thermal and wind package, an after-tax charge of $15 million for integration-related costs associated with the acquisition of Columbia and a $4 million after-tax charge related to the maintenance of Keystone XL assets. Second quarter 2016 included a charge of $113 million related to costs associated with the Columbia acquisition which were primarily related to the dividend equivalent payments on the subscription receipts issued as part of the permanent financing of the transaction, an after-tax $10 million restructuring charge related to expected future losses under lease commitments and $9 million after-tax related to Keystone XL maintenance and liquidation costs. All of these specific items as well as unrealized gains and losses from changes in risk management activities are excluded from comparable earnings.

Comparable earnings for second quarter 2017 were $659 million or $0.76 per share compared to $366 million or $0.52 per share for the same period in 2016, an increase of $293 million or $0.24 per share and includes the dilutive effect of issuing 161 million common shares in 2016. The increase in second quarter comparable earnings was primarily due to higher contributions from U.S. Natural Gas Pipelines reflecting incremental earnings from Columbia following the July 1, 2016 acquisition and higher ANR transportation revenues resulting from higher rates effective August 1, 2016, higher earnings from Bruce Power mainly due to higher volumes resulting from fewer planned outage days, a higher contribution from Mexican Natural Gas Pipelines due to earnings from the Mazatlán and Topolobampo pipelines and higher earnings from Liquids Pipelines mainly due to higher volumes. These increases were partially offset by higher interest expense mainly as a result of debt assumed in the acquisition of Columbia and long-term debt issuances. 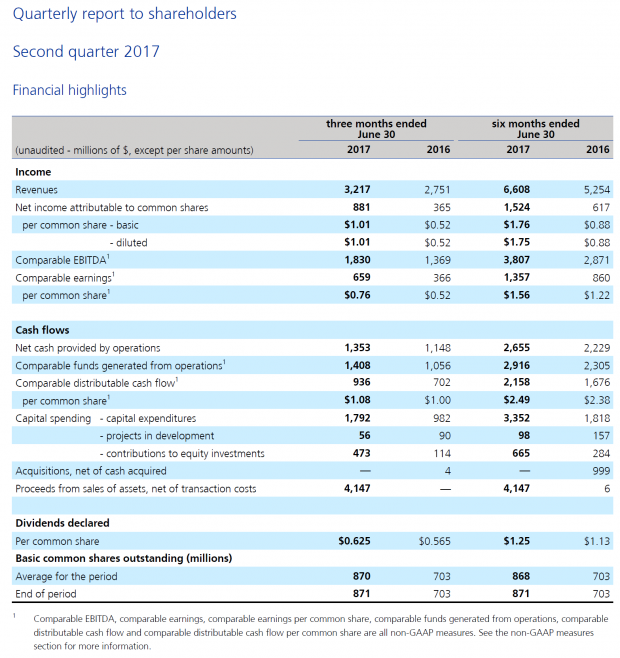