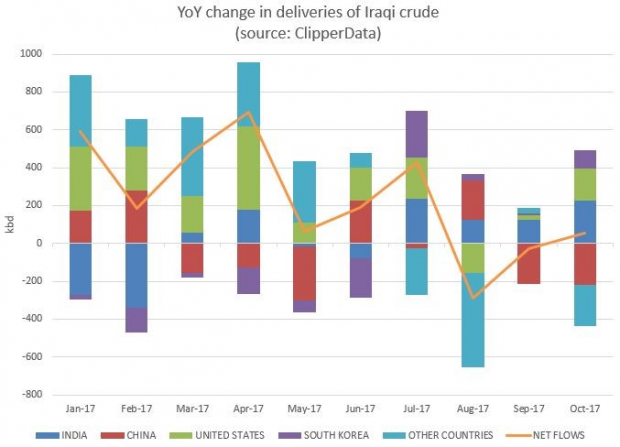 PLATTS - Saudi Arabia's strong commitment to the OPEC agreement to limit crude production may have helped some of its rival producers gain market share in Northeast Asia, with China recently boosting its oil imports from Iraq as competitive Basrah crude prices and the supplier's stable output appealed to the giant Asian energy consumer.

Since early third quarter last year, Saudi Aramco has been consistently cutting its monthly crude term allocations to various customers in the Far East, prompting big Northeast Asian consumers including China, South Korea and Japan to look for more reliable supply sources within and beyond the Middle East.

Latest data from Beijing showed that Chinese refiners could have switched focus to Iraq for a significant chunk of their monthly crude feedstock requirements amid sliding Saudi crude exports to Asia.

China's crude oil imports from Iraq in November surged 47.2% on year and 58.8% on month to hit a record high of 4.21 million mt or an average 1.03 million b/d, making the Persian Gulf producer its third-largest supplier, data from China's General Administration of Customs showed.

"If Saudi refuses to sell much, [Asian end-users] must find another big reliable [supply] source in the Middle East ... arbitrage [spot purchases from] US, Mexico, Europe alone cannot fully make up for the decline [in Saudi term barrels]," said a Northeast Asian sour crude trader.

Saudi Arabia has been shouldering the burden of cuts under the OPEC production deal and Riyadh had indicated early last month that it will continue curbing its output and come down hard on non-compliant countries.

Asian traders noted that many regional refiners are attracted to Iraq despite tightening Middle Eastern crude exports as the country's production has been relatively unfazed by the continued OPEC efforts to limit output.

The producer self-reported to OPEC a November figure of 4.36 million b/d, saying that production had been stable at that level since September.

In addition, average exports from Iraq's southern terminals in the Persian Gulf rose 130,000 b/d on month to 3.346 million b/d in October, went up further to 3.502 million b/d in November and hit record 3.535 million b/d in December, data from the country's oil ministry showed.

"Essentially, production from Iraq and Iran have not dropped much compared to other OPEC members ... obviously they will stand out as reliable supply sources," said a crude trader at a Chinese oil company.

Meanwhile, the Chinese customs data showed that the country also raised its crude imports from Russia, possibly in an attempt to fill the supply gap left by the recent string of monthly Saudi term allocation cuts to Asian refiners.

Russia comfortably remained China's top crude supplier in November, with arrivals rising 10.1% month on month to 5.12 million mt. Saudi Arabia held on to second place in the month but shipments were down almost 6% from October.

Japan's November crude imports from Iraq rose to 93,279 b/d from none in October, while intake from Russia jumped 37% on month to 163,594 b/d, according to preliminary data released last month by the Ministry of Economy, Trade and Industry.

Iraq's State Oil Marketing Organization previously set the official selling price of its Basrah Light crude grade loading in October and bound for Asia at a discount of 25 cents/b to the Platts Oman and Dubai average for the month, equivalent to an outright value of $55.32/b.

In comparison, Platts front-month cash Dubai assessments averaged $55.55/b in October, while Abu Dhabi National Oil Company had set its OSP for medium sour Upper Zakum crude for loading in October at $56.20/b.

State-owned Qatar Petroleum earlier raised its OSP for medium sour Qatar Marine crude cargoes loaded in October by $2.20/b from September to $55.80/b.

Basrah Light's OSP for November was also among the most attractive in the medium sour Middle Eastern crude complex, coming in at $60.57/b, compared with Upper Zakum's $61.75/b and Qatar Marine's $61.45/b. Platts cash Dubai assessments averaged $60.82/b in November.

"Abundance [in supply] and cheap prices ... big buyers will gather," said a sour crude trader based in Singapore.