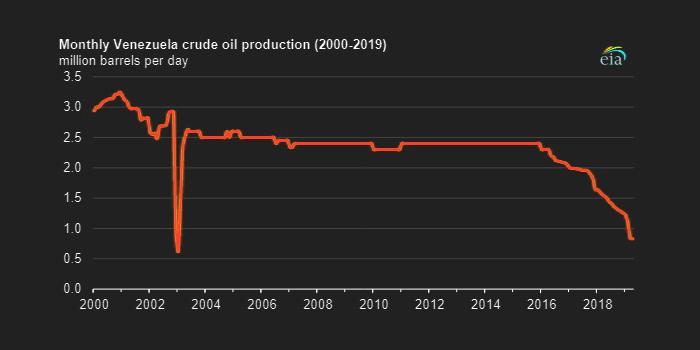 PLATTS - Chevron is pushing back against the Trump administration's plans to let the company's Venezuela sanctions waiver expire, arguing such a move could ultimately drive oil production up, bolstering both the Maduro regime and Russia's standing in the global market.

"It'd be a very short-term gain for a huge, long-term cost," a source familiar with Chevron's operations told S&P Global Platts. "They'd be giving away the keys to our operations and allowing Rosneft to take over."

Chevron and four US oil services companies are operating in Venezuela outside of US sanctions under a US Treasury Department general license which expires October 25. Chevron stands to lose an estimated $2.5 billion if the waiver expires and it is forced to leave Venezuela, according to the company's latest quarterly report filed with the US Securities and Exchange Commission.

Some analysts believe that Venezuela's oil output, already at a historically low 600,000 b/d, could plunge below 300,000 b/d, if the waiver is allowed to expire, making this option an attractive one to Trump administration officials eager to ratchet up pressure on the Maduro regime.

But Chevron and other analysts believe that any decline in production will be short-lived if Rosneft, or another Russian or Chinese company, takes control of Chevron's Venezuelan assets. Analysts estimate that if Rosneft were to take over Chevron's operations it could return output to current levels within 45 days.

"If you revoke that license, it's not going to have a material impact on crude output," said David Voght, managing director of IPD Latin America, an energy consultancy. "I don't think it results in any increased pressure on the Maduro regime."

These joint ventures produced about 120,000 b/d in September, according to Voght. Of the 25 drilling rigs currently operating in Venezuela, 20 are supplied by PDVSA and the remaining five by US companies for Chevron's joint ventures. However, Voght pointed that these projects are operated by PDVSA, not Chevron, minimizing any output impact from Chevron's departure.

"If Chevron is forced to leave Venezuela, non-US companies will fill the void and oil production will continue," Ray Fohr, a Chevron spokesman, said in a statement earlier this week.

"Rosneft has the resources to take over these operations anytime," said Einstein Millan Arcia, a petroleum engineer and independent oil analyst. "In the worst case scenario, about 10% to 15% of the overall output could be at risk for a few days because of minor issues, but that's easily reversible."

Rosneft did not respond to a request for comment.

However, Voght said he expects Venezuelan oil output may fall to 325,000 b/d by the end of the year, even if Chevron remains in the country.

US sanctions are not forcing a drop in output, but are severely limiting the ability of PDVSA to export its crude, causing an increase in inventories and limiting storage availability, Voght added.

PDVSA's crude oil inventories rose to 34.1 million barrels in October, up from 22.7 million barrels in September, because of a lack of buyers and tankers as well as cargo cancellations, according to a technical report seen by Platts on Thursday.

"Production is going to continue to fall," Voght said.

The US Treasury Department Thursday extended a sanctions waiver allowing a Finnish oil refining and marketing company to continue its joint venture with PDVSA for six months.

The waiver for Nynas, the joint venture between PDVSA's PDV Europa and Finland's Neste, was set to expire on October 25.