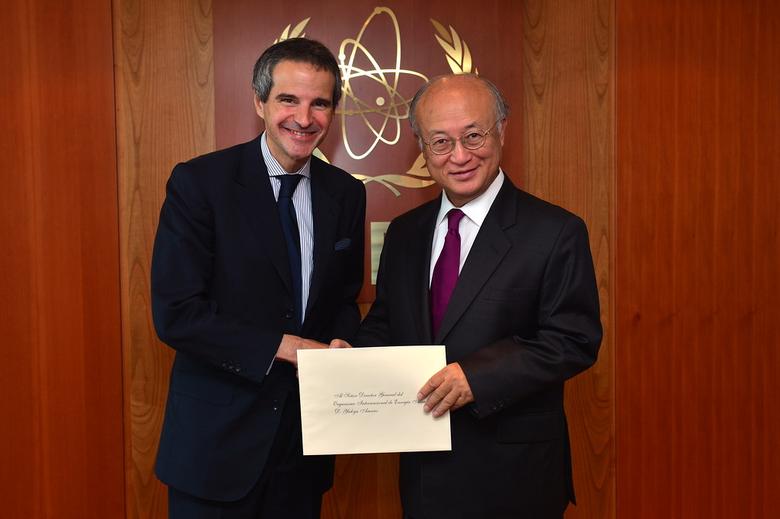 WNN - 30 October 2019 - Argentinian Ambassador Rafael Mariano Grossi has today been appointed director general of the International Atomic Energy Agency (IAEA) by the organisation's board of governors. He is set to take office in early December.

In a meeting open to representatives of all 171 IAEA Member States, the 35-nation board of governors appointed by acclamation Grossi as director general, to serve for four years from 3 December.

The board's decision will be submitted for approval to the IAEA General Conference, consisting of representatives of all Member States, which will meet for a special session on 2 December.

Currently Argentina's Ambassador to Austria and the country's Permanent Representative to the Vienna-based International Organisations, including the IAEA, 58-year-old Grossi has 35 years of professional experience in non-proliferation and disarmament. He chairs the nuclear Non-Proliferation Treaty Review Conference, which is due to be held in New York next year.

Four candidates applied for the position of IAEA director general: Cornel Feruta of Romania, Lassina Zerbo of Burkina Faso and Marta Žiaková of Slovakia. Through a series of straw polls, the candidates were narrowed down to Grossi and Feruta (currently acting director general of the IAEA). In a closed session yesterday, Grossi received the support of 24 members of the board of governors in a ballot, obtaining the majority required.

Speaking yesterday, Grossi said: "I am delighted that the members of the board of governors have given me very strong support, and we had, as you know by now, a very comfortable difference, which means that the board has come together behind me, in this case, to lead the agency for the next few years."

He added, "The work of the agency is of the essence for international peace and security - this is clear for all of us. It is also essential for development of so many things that countries that are members of this agency care about."

Agneta Rising, director general of World Nuclear Association, said: "We have enjoyed working with Mr Grossi and the Agency for many years, strengthening the dialogue between government organisations and industry to increase understanding and help reach effective solutions.

"We look forward to continuing this fruitful collaboration with the IAEA and Mr Grossi in his new role as director general. The IAEA plays an important role in promoting the peaceful use of nuclear technologies, which continue to grow in importance as the world fights climate change and energy poverty, and works towards achieving the Sustainable Development Goals."

The former IAEA director general, Yukiya Amano, passed away in July. His term in office was due to end in late 2021, but Amano, who was 72, had been planning to step down from the post, which he had held for almost 10 years.

NUCLEAR POWER FOR CLIMATE
“I’m worried about the decline of nuclear in the energy mix if governments don’t change their policies,” Birol said referring to new capacity and lifespan extensions.
English
All Publications »
Tags: IAEA
OIL PRICE: BRENT NEAR $82, WTI ABOVE $75