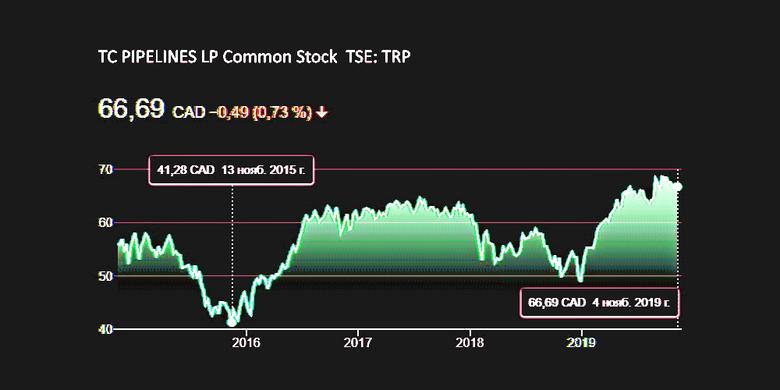 "During the third quarter of 2019, our diversified portfolio of regulated and long-term contracted assets continued to perform very well," said Russ Girling, TC Energy’s President and Chief Executive Officer. "Despite significant asset sales that have accelerated the strengthening of our balance sheet, comparable earnings per share increased four per cent compared to the same period last year while comparable funds generated from operations of $1.8 billion were 15 per cent higher. The increases reflect the robust performance of our legacy assets and contributions from the approximately $8.2 billion of growth projects that have entered service to date in 2019. Those increases were partially offset by lower contributions from approximately $3.4 billion of assets that were monetized during the first nine months of the year."

The asset sales included the Coolidge gas-fired power plant in Arizona, certain Columbia Midstream assets and an 85 per cent equity interest in Northern Courier. In addition, the Company has entered into an agreement to sell its Ontario gas-fired power plants including Napanee, Halton Hills and a 50 per cent interest in Portlands Energy Centre for approximately $2.87 billion. Including this transaction, which is anticipated to close in first quarter 2020, proceeds from asset sales are expected to total approximately $6.3 billion.

"Each of these transactions allowed us to surface significant value and redeploy the proceeds into our $30 billion secured capital program, thereby reducing our need for external funding including common equity," added Girling. "When combined with our significant internally generated cash flow and access to debt capital markets, we are well positioned to prudently fund our capital program in a manner that maximizes earnings and cash flow per share and is consistent with achieving targeted run-rate credit metrics including debt-to-EBITDA in the high four times area. As a result, we do not expect to issue any additional common shares from treasury under our Dividend Reinvestment Plan commencing with fourth quarter 2019 dividends."

Looking forward, TC Energy also continues to progress more than $20 billion of projects under development including Keystone XL and the Bruce Power life extension program. Success in advancing these and other growth initiatives that are expected to emanate from our five operating businesses across North America could extend our current dividend growth outlook of eight to 10 per cent through 2021.

Net income attributable to common shares decreased by $189 million or $0.23 per common share to $739 million or $0.79 per share for the three months ended September 30, 2019 compared to the same period last year. Per share results reflect the dilutive impact of common shares issued under our DRP in 2018 and 2019 and our Corporate At-The-Market (ATM) program in 2018. Third quarter 2019 results included an after-tax loss of $133 million at September 30, 2019 related to the Ontario natural gas-fired power plants held for sale, an after-tax loss of $133 million related to the sale of certain Columbia Midstream assets in August 2019 and an after-tax gain of $115 million related to the partial sale of Northern Courier in July 2019. Third quarter 2018 results included after-tax income of $8 million related to our U.S. Northeast power marketing contracts. These specific items, as well as unrealized gains and losses from changes in risk management activities, are excluded from comparable earnings.

Comparable EBITDA increased by $288 million for the three months ended September 30, 2019 compared to the same period in 2018 primarily due to the net effect of the following:

Comparable earnings increased by $68 million or $0.04 per common share for the three months ended September 30, 2019 compared to the same period in 2018 and was primarily the net effect of:

Comparable earnings per common share for the three months ended September 30, 2019 also reflects the dilutive impact of common shares issued under our DRP in 2018 and 2019 and our Corporate ATM program in 2018.