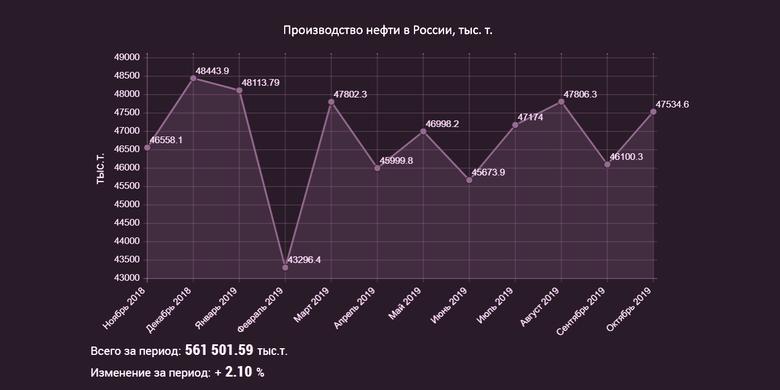 REUTERS - Russian oil output rose to 11.244 million barrels per day (bpd) in November, the Energy Ministry data showed on Monday, pumping more than agreed under a deal with OPEC and other producers, a group that meets this week to discuss output policy.

The Organization of the Petroleum Exporting Countries and non-OPEC producers meet in Vienna on Thursday and Friday. The Monday data showed Moscow was producing on average 64,000 bpd more than it should under the global deal.

OPEC compliance with the cuts has risen to 152% in November, up from 135% in October, according to a Reuters survey, meaning OPEC was producing less than it could under existing quotas.

Russian oil production in October was at 11.229 million bpd and the Energy Minister Alexander Novak has said that Moscow would aim to stick to its commitments in November.

Russia has called for a change to the way its output level is measured to exclude gas condensate, which accounts for about 7%-8% of Russia's total oil production, or to about 800,000 bpd.

The Energy Ministry data showed Russia's top private gas producer Novatek had increased liquids production by 0.5% in November, month-on-month, and a growth of over 1% was recorded at fields operated by small producers and under production sharing agreements.

Reuters uses a conversion rate of 7.33 barrels per tonne of oil.