IEEFA- The market capitalization of five of the top 10 U.S. coal companies was sliced by more than half from early January to mid-November 2019.

Those top 10 producers' market value totaled about $4.42 billion as of Nov. 22, a 59.4% drop from $10.88 billion as of Jan. 8, according to data compiled by S&P Global Market Intelligence. The group of companies saw double-digit percentage declines in market capitalization from Jan. 8 to Nov. 22 as domestic demand waned and the seaborne market weakened. Rhino Resource Partners LP, which rounded out the top 10 as of Nov. 22, saw the smallest percentage decline between the periods, with… 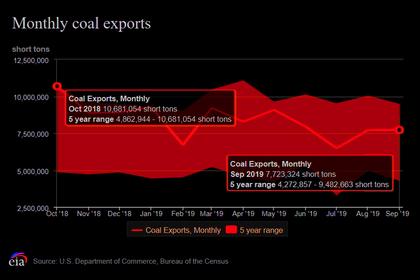 U.S. COAL EXPORTS DOWN
In the first nine months of 2019, US thermal exports were more than 10 million mt below the year-ago period's total, and vessel tracking data show October exports are expected to come in close to September levels.
English 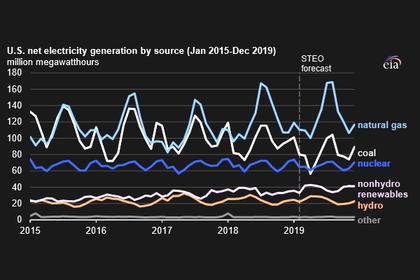 U.S. COAL GENERATION DOWN
US coal-fired power generation totaled 85.9 TWh in September, down 8.8% from August,
English
All Publications »
Tags: USA, COAL
OIL PRICE: NOT BELOW $43