REUTERS - Oil prices rose on Monday, buoyed by output cuts by producer club OPEC and reports that the United States and China are close to a deal to end a bitter tariff row that has slowed global economic growth.

The rally followed reports that the United States and China are close to ending their year-long trade dispute.

The two countries appear close to a deal that would roll back U.S. tariffs on at least $200 billion worth of Chinese goods, as Beijing makes pledges on structural economic changes and eliminates retaliatory tariffs on U.S. goods, a source briefed on negotiations said on Sunday in Washington.

The “substantive progress” China and the United States have made in their trade talks has been “well-received” in both countries and around the world, a senior Chinese official said on Monday.

Supply from the Organization of the Petroleum Exporting Countries (OPEC) fell to a four-year low in February, a Reuters survey found, as top exporter Saudi Arabia and its allies over-delivered on the group’s supply pact while Venezuelan output registered a further involuntary decline.

“OPEC exports are off by over 1.5 million barrels per day (bpd) since November,” Barclays bank said in a note released on Sunday.

“The supply picture looks generally tighter this year,” said energy analysts at Fitch Solutions in a note on Monday, adding they expected Brent to average $73 per barrel in 2019.

Oil prices have been further pushed up by U.S. sanctions against OPEC-members Iran and Venezuela, which Barclays bank estimates to have resulted in a reduction of around 2 million bpd in global crude supply.

In the United States, there are signs that the oil production boom of the past years, which has seen crude output rise by more than 2 million bpd since early 2018 to more than 12 million bpd, may slow down.

U.S. energy firms last week cut the number of oil rigs looking for new reserves to the lowest in almost nine months as some producers follow through on plans to cut spending despite an over 20-percent increase in crude futures so far this year.

Despite this, Barclays said “we believe that there could be a repeat performance in the second-half of this year” for U.S. oil output. 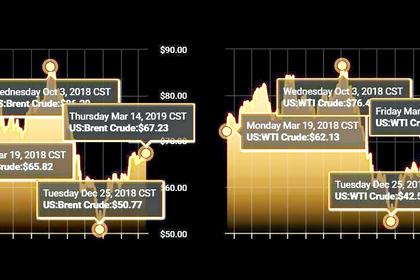 OIL PRICE: NOT ABOVE $70
Oil prices climbed on Friday as markets tightened amid output cuts by producer club OPEC, but surging U.S. supply and concerns of global economic slowdown kept a lid on further gains.
English