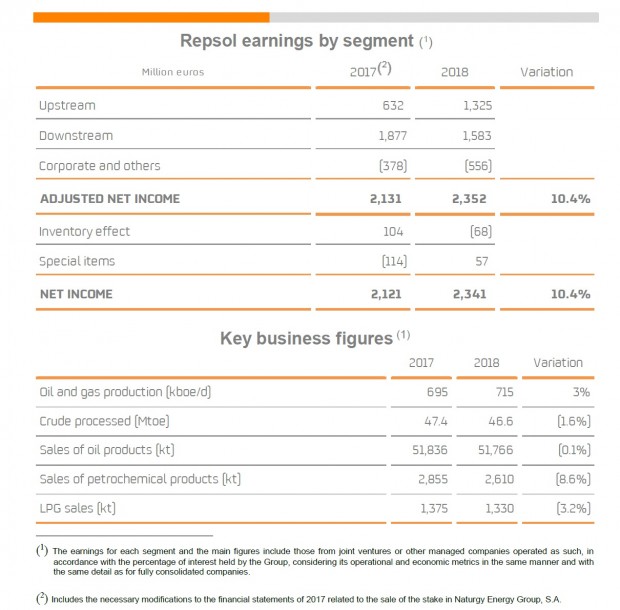 In addition to the strength of its businesses, these results reflect Repsol's adaptability and innovation—particularly following the implementation of the efficiency program in recent years—as well as its flexibility to incorporate and develop new capabilities. All of this has allowed the company to increase value generation while simultaneously playing a more active role as a multi-energy provider.

The company's integrated business model allowed it to take full advantage of improved oil prices - Brent was 32% higher than in 2017 – although they remained far from their historic highs. In contrast, the Henry Hub gas benchmark averaged a price similar to last year.

In this context, the Upstream unit doubled its earnings to 1.325 billion euros, continuing the positive trend of previous years. The increase in production and rising oil prices were integral to this positive performance, as were the efficiency measures and digitalization programs, which continue to demonstrate their effectiveness.

The Downstream unit earned 1.583 billion euros, with improved performance from the commercial businesses, Marketing and LPG (liquefied petroleum gas), and positive results from Trading & Gas. The Chemicals unit was affected by a worsening international environment, maintenance shutdowns at some industrial facilities, which also affected refining, and the weakness of the dollar against the euro.

The company's EBITDA increased to 7.513 billion euros, 12% higher than the 6.723 billion in the previous year.

The Group's positive business performance, along with the sale of its stake in Naturgy Energy Group, led to a 45% fall in net debt to 3.439 billion euros, compared with the 6.267 billion at the end of 2017. Meanwhile, liquidity rose to 8.742 billion euros by late December.

Repsol updated its 2020 strategy last June, after meeting the objectives of the 2016-2020 Strategic Plan two years ahead of schedule. This update is based on three pillars: increasing shareholder compensation, fostering profitable growth in the Upstream and Downstream units, and developing new businesses connected to the energy transition.

In that respect, Repsol reached an agreement in June 2018 to purchase Viesgo's non-regulated, low-emissions electricity generation businesses and its gas and electricity distributor, including 750,000 customers. With this acquisition, which was completed on November 2nd, Repsol strengthened its position as a multi-energy operator, achieving a total installed capacity of 2,952 MW (2,352 MW from this transaction and 600 MW from its existing cogeneration plants).

In the third quarter, the company also acquired the Valdesolar photovoltaic project planned in the Valdecaballeros (Badajoz, Spain), which is in the administrative permitting phase. The project will have an installed generation capacity of 264 MW. With these additions, Repsol will have achieved more than 70% of its strategic objective for a low-emissions generation capacity of 4,500 MW by 2025.

In October, the company also secured financing for the construction of one of the largest floating offshore wind farms in the world, located off the coast of Portugal with an installed capacity of 25 MW.

During the year, Repsol raised shareholder compensation to 0.9 euros/share, an increase of 15%. Additionally, it achieved a reduction in share capital through the cancellation of own shares by an amount equivalent to the shares issued in 2018 through the scrip dividends, resulting in increased earnings per share.

The company plans to raise the dividend to one euro per share in 2020, with a total repurchase of the shares issued in the Repsol Flexible Dividend program. All of this positions its shareholder compensation among the highest in the sector.

Repsol continued to advance its digitalization program, which is being implemented throughout the organization and will increase cash flow by one billion euros in 2022, both through new income and the optimization of investments and expenses. It will also offer higher-safety processes, contribute to emissions reduction and promote circular economy initiatives.