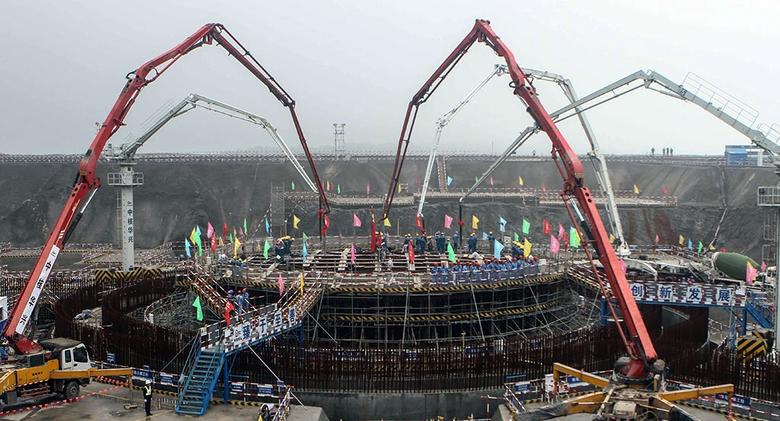 WNN - China wants to promote nuclear energy cooperation in the 'Belt and Road', and is focusing on new technology deployment and completing its radioactive waste management strategy, a conference in Beijing heard. The Belt and Road Initiative is a development strategy adopted by the Chinese government involving infrastructure development and investments in 152 countries and international organisations.

The country accounts for about one-fifth of nuclear capacity under construction globally - 10.8 GWe of the 56.3 GWe total - while its construction performance means eight of the last 10 new reactors to start up were in China. However, these start-ups are the result of construction approvals granted five or six years ago whereas approvals for new projects have been withheld for the last three years. This hiatus is expected to end soon now that the first EPR and AP1000 units are in operation at Taishan and Yangjiang, respectively. In parallel, construction of the first indigenous Haulong One units, Fuqing 5 and 6, is progressing with installation of large components, such as the steam turbine, at an advanced stage.

The conference aimed to promote international cooperation on nuclear energy in the 'Belt and Road' and accordingly Yu highlighted the Chinese export to Pakistan of two ACP-1000 pressurised water reactors to the Karachi nuclear power plant. The first of these, Karachi 2, began construction in August 2015 and is nearing completion. It will be put into operation soon, he said. Pakistan started up new Chinese-supplied CNP-300 units in 2016 and 2017, doubling its nuclear power production to 6.2% of generation. When in operation the new Karachi units would take that to at least 16%.

In China, Yu looked forward to the start-up of the high temperature gas-cooled reactor at Shidao Bay (Shandong Shidaowan). The pilot pebble-bed design unit started construction at the end of 2012 and is now in the "final stage of installation and commissioning" to be completed in the first half of 2020, said Yu.

With its nuclear sector well established and growing fast, China is making firm plans to establish appropriate waste management infrastructure for the trend to continue.

"In 2016, China set up a mechanism for the reprocessing of spent fuel at the national level, and the post-treatment of spent fuel was fully accelerated," Zhang Jianhua, deputy director of the China Atomic Energy Authority (CAEA), told the conference.

"At present, the construction of spent fuel reprocessing capacity in China is progressing steadily in accordance with the three-step plan of 'pilot scale, demonstration scale, industrial scale'".

A demonstration used fuel treatment plant, with a capacity of 200 tonnes of used fuel per year, is being built in Gansu Nuclear Technology Industrial Park in Gansu province by CNNC Longrui Technology Company, which was set up in March 2015.

'Industrial scale' refers to a full-size reprocessing plant that would accept highly radioactive used nuclear fuel assemblies currently stored under water at power plants, before dissolving them to separate recyclable uranium and plutonium from waste products which can then be packaged ready for disposal.

A coastal site in Jiangsu province has been suggested, so that used fuel could be transported by ship. In July 2016 Lianyungang city in Jiangsu was mentioned as likely for the site, close to the Tianwan nuclear power plant, but public protests caused local government to back away from the proposal.

Talks about this under cooperation with France made progress recently during Chinese President Xi Jinping's meetings in Paris with French President Emmanuel Macron.

Regarding the disposal of nuclear wastes, Zhang said China had completed the site-selection work and the CAEA had approved plans for the first underground laboratory for disposal of highly radioactive wastes.

China has a "three-step strategy of 'site selection, underground experiment and disposal bank construction'", with the goal of finally building a high-discharge waste disposal site by 2050, he said.