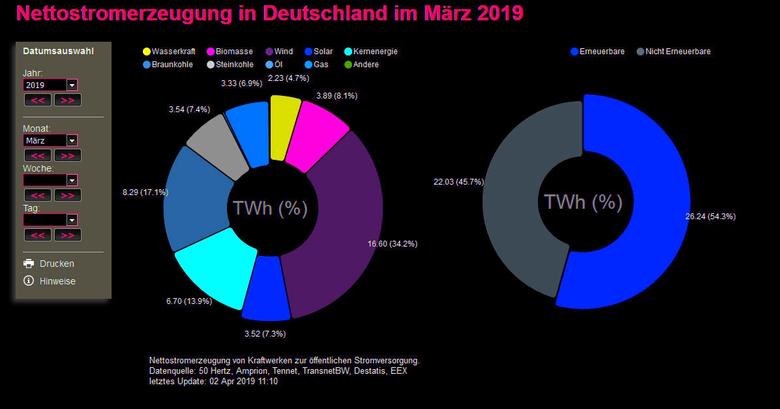 PVM - Germany set a new record in March as more than half of its power was generated from wind, PV and other renewables. In the first quarter, renewables accounted for 45.4% of net electricity generation, according to Energy Charts from Fraunhofer ISE.

According to Energy Charts, the performance in March was largely attributable to high wind power generation, which accounted for 34.2% of net electricity generation for the month, reaching a peak of 57.7% on March 9.

PV systems accounted for an average of 7.3% of net electricity production throughout the month, according to Energy Charts. Solar PV daily generation peaked on March 30, when it accounted for 17.9% of net generation.

However, it is dramatic if one looks at the amount of newly installed wind power and, in the long run, PV output for this year. "Not since 2014 has the monthly increase in wind power been so small," said Bruno Burger, head of the Energy Charts at Fraunhofer ISE. The drop in new installations is a consequence of the new energy law that was passed at the end of last year; a similar slowdown could be seen in the solar sector in the months ahead, Burger said.

"By May at the latest, there will be a dent," he added, while also claiming that Germany urgently needs an additional 10 GW of newly installed PV capacity per year, without any pull-forward effects or high volumes from special tenders.

Germany's nuclear power plants accounted for 13.9% of the total, while gas-fired power plants contributed 6.9%. In the first quarter, there was also a significant increase in electricity generation from renewable energy, accounting for 45.4% of net generation, up 19% from a year earlier, according to Energy Charts.