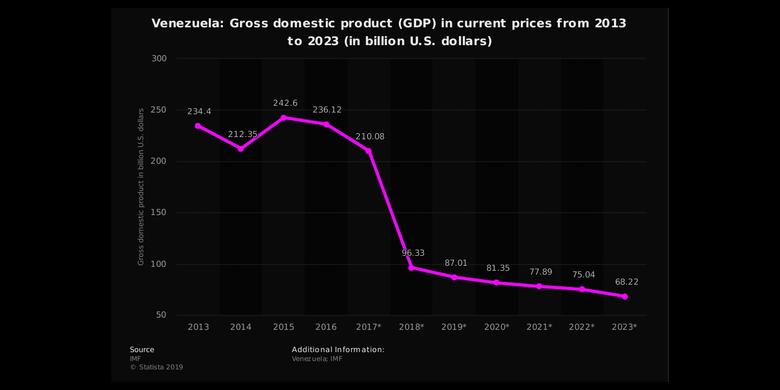 The OPEC member stabilized exports in March after shipments fell about 40 percent in February from the prior months, in the immediate aftermath of the United States announcing it would impose sanctions on oil sales to choke off the main source of revenue for socialist President Nicolas Maduro.

The United States and many Western governments have recognized Venezuelan opposition leader Juan Guaido as the country's rightful leader. Guaido in January invoked the constitution to assume an interim presidency on the grounds that Maduro's 2018 re-election was illegitimate.

March's exports of 980,355 barrels per day (bpd) of crude and fuel were only slightly below February's shipments of 990,215 bpd, according to the documents seen by Reuters and the Refinitiv Eikon data.

U.S. restrictions on Venezuelan exports will tighten further in May, when the grace period for winding down purchases expires for importers of Venezuelan oil who use U.S. subsidiaries or the U.S. financial system for transactions.

"(We will) continue to take action to ensure Venezuela's energy resources are preserved for the legitimate government of interim president Juan Guaido, for the people of Venezuela, and the reconstruction of a country destroyed through mismanagement and corruption," a senior U.S. administration official told Reuters on Tuesday.

Most oil shipments in February and March were destined for Asia. Until the sanctions, the United States was Venezuela's largest crude buyer.

"Given the new set of challenges that landed on PDVSA's lap, we were surprised to see a rebound in exports amid the nationwide power blackouts," said Samir Madani, co-founder of TankerTrackers.com, a service that tracks oil shipments and storage.

Exports dipped below 650,000 bpd during the blackouts, TankerTrackers estimates.

PDVSA was able, however, to offset delays caused by the blackouts by loading larger vessels bound for Asia. Shipping data shows the company plans to do the same again in April.

Cargoes sent to India, China and Singapore - a hub for storage and re-exports - made up 74 percent of total exports in March, compared with almost 70 percent in February.

Exports to Europe accounted for 17 percent of the total, versus 22 percent the previous month.

PDVSA also continued exporting oil to Maduro's ally Cuba. At least seven small cargoes were sent from its ports in March, totaling 65,520 bpd of crude and fuel, according to the data.

Guaido last month said shipments to Cuba should be halted. But PDVSA, controlled by a military leadership loyal to Maduro, has continued exports to the island.

The state-run company did not respond to a request for comment.

Venezuela's oil production once surpassed 3 million bpd, but years of what critics say is mismanagement and corruption have caused that output to dwindle. The reduction in oil revenue has led the once-prosperous nation into recession and created conditions for hyperinflation. Millions have fled the country and many who remain cannot afford food or basic goods.

Sanctions have made it difficult for PDVSA to take payment for its exports, said a PDVSA source, who did not want to be identified for fear of retaliation.

"The largest problem is not to load and ship the vessels," the source said, declining to be identified due to the sensitivity of the matter. "It is to get paid."

India was once again Venezuela's main destination for exports in March, with a third of total cargoes sent to refineries operated by Reliance Industries and Nayara Energy.

U.S. imports of Venezuelan oil have dropped to zero since mid-March due to sanctions, according to the U.S. Energy Information Administration.

The largest individual recipient of Venezuelan barrels last month was China National Petroleum Corp (CNPC) and its subsidiaries with some 234,000 bpd, followed by Russia's Rosneft, which received 214,000 bpd, according to the data. New customers including trading firms Sahara Energy and MS International also received access to Venezuelan crude.

Rosneft has also boosted fuel supplies to Venezuela, according to the data. Venezuela imported 184,500 bpd of fuel last month, with the largest portion provided by the Russian company, followed by cargoes sent by Reliance and Spain's Repsol.

Following U.S. pressure, Reliance turned to selling fuel to Venezuela from India and Europe to circumvent sanctions. Repsol in March swapped gasoline and other fuel for Venezuelan crude as part of an agreement to collect on dividends owed it by PDVSA.