SHANA - The secretary general of the Organization of the Petroleum Exporting Countries (OPEC) said there were no unilateral decisions in the organization.

Speaking to reporters on the sidelines of the 24th Iran Oil Show in Tehran, Mohammed S Barkindo said regarding the issue of Iran and the sanctions, there were talks in ministerial and secretariat level so that solutions could be found in this regard.

He said Iran had been faced with similar challenges in recent years and "I am sure that it can overcome these issues."

"Over the 60 years since establishment of OPEC, we have faced many challenges, but what has always helped us is the unity of member stations. If we can preserve this unity, we can overcome the problems again," Barkindo said on Thursday.

He further added that OPEC made decisions as a group and there were no "unilateral decisions" in the organization.

"OPEC's policy is to consult experts and made a collective decision."

Asked whether Iran's oil could be removed from the market, Mr. Barkindo said: "No repetition is needed. Eliminating Iran from the oil market is impossible."

He further said he was worried about division between OPEC members, saying, "Iran's challenge does not only concern this country, and impacts OPEC as a whole and what happens to Iran, Libya and Venezuela influence the market and the oil industry." 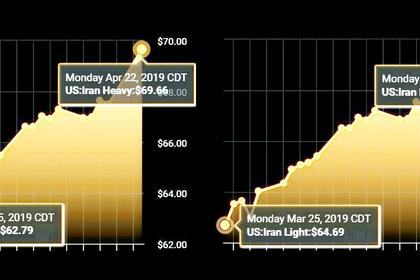 U.S., IRAN SANCTIONS
Oil futures settled at fresh six-month highs Monday as the market looked at an increasingly tight global supply picture in light of the White House decision. ICE June Brent settled up $2.07/b at $74.04/b, and NYMEX May WTI settled $1.70/b higher at $65.70/b. Monday marked the highest front-month settle for both contracts since late October, just before the US sanctions snapped back.
English
All Publications »
Tags: IRAN, OPEC, OIL, PRODUCTION, PRICE
OIL PRICE: BRENT BELOW $86, WTI NEAR $79