REUTERS - Oil prices fell on Thursday, pulled down by record U.S. crude production that led to a surge in inventories.

Brent crude oil futures were at $71.47 per barrel at 1037 GMT, 71 cents below their last close. Brent is set for a weekly loss, which would break its longest string of weekly gains for a year.

U.S. West Texas Intermediate crude futures were down 76 cents at $62.84 per barrel.

Oil prices, though, are still supported by the political crisis in Venezuela, stricter U.S. sanctions against Iran that allow no more exemptions from May, and as the Organization of the Petroleum Exporting Countries continues to withhold supply.

Oman's energy minister Mohammed bin Hamad al-Rumhy said on Wednesday it was OPEC's goal to extend the production cuts, which started in January, when the group and its allies next meet in June.

Despite the desire of many OPEC members to continue supply cuts, the group may eventually be forced into action to meet demand in a market that has seen prices rise more than 30 percent this year.

Russia has sent signals about potentially increasing output. In April, however, the country's oil output fell to 11.23 million bpd from 11.3 million bpd in March, still above OPEC quotas.

Fitch Solutions analysts also warned, beyond Venezuela, of risks to supply from Libya, where a civil war threatens to cut oilfields off from markets. 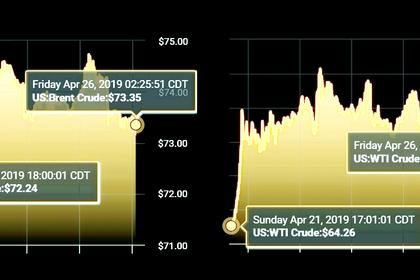 OIL PRICE: OPEC + RUSSIA
the risk of oil prices heading well above $70/b to the oil market and the global economy, while also saying that if prices were too low it would hit investment in the industry and key oil producing countries.
English
All Publications »
Tags: OIL, PRICE, BRENT, WTI
OIL PRICE: BRENT BELOW $88, WTI ABOVE $81