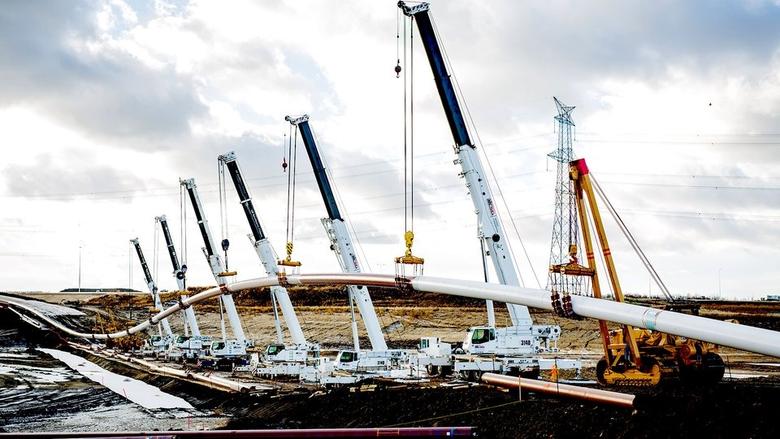 "We are very pleased with the performance of our diversified and irreplaceable portfolio of high-quality, long-life energy infrastructure assets which continued to produce record financial results through the first quarter of 2019,” said Russ Girling, TransCanada’s president and chief executive officer. “Comparable earnings per share increased nine per cent compared to the same period last year while comparable funds generated from operations of $1.8 billion were eleven per cent higher. The increases reflect the strong performance of our legacy assets along with contributions from approximately $5.3 billion of growth projects that were placed into service in first quarter 2019."

"With the demand for our existing assets driving historically high utilization rates and $30 billion of secured growth projects underway, approximately $7 billion of which are expected to be completed by the end of the year, earnings and cash flow are forecast to continue to rise. These projects are supported by regulated or long-term contracted business models that are expected to support annual dividend growth of eight to ten per cent through 2021,” added Girling. “We have invested $10 billion in these projects to date and are well positioned to fund the remainder of our secured growth program through significant and growing internally generated cash flow and access to capital markets. We also continue to progress various portfolio management activities, including the announced sale of our Coolidge generating station which is expected to close by mid-year. This will allow us to prudently fund our capital program in a manner that is consistent with achieving targeted leverage metrics, including debt-to-EBITDA in the high four times area, in 2019 and thereafter and deliver ongoing growth as measured on a per-share basis."

"Looking ahead, we continue to methodically advance more than $20 billion of projects under development including Keystone XL and the Bruce Power life extension program. Success in progressing these and other growth initiatives that are expected to emanate from our five operating businesses across North America could extend our growth outlook well into the next decade," concluded Girling. 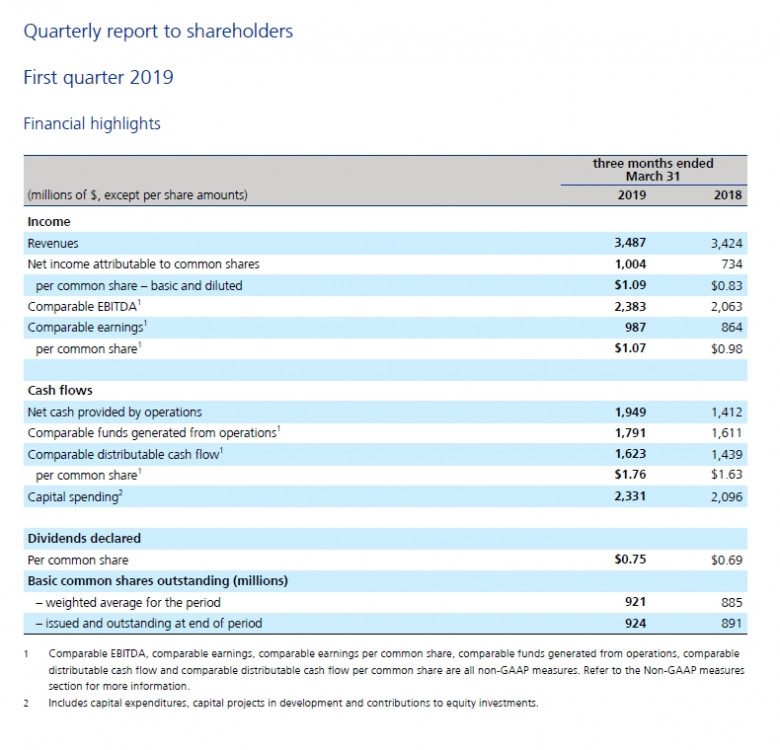 Net income attributable to common shares increased by $270 million or $0.26 per common share to $1.004 billion or $1.09 per share for the three months ended March 31, 2019 compared to the same period last year. Per share results reflect the dilutive impact of common shares issued under our DRP in 2018 and 2019 and our Corporate ATM program in 2018. First quarter 2019 and 2018 results included an after-tax loss of $12 million and an after-tax gain of $6 million, respectively, related to our U.S. Northeast power marketing contracts. These specific items, as well as unrealized gains and losses from changes in risk management activities, are excluded from comparable earnings.

Comparable EBITDA increased by $320 million for the three months ended March 31, 2019 compared to the same period in 2018 primarily due to the net effect of the following:

Comparable earnings increased by $123 million or $0.09 per common share for the three months ended March 31, 2019 compared to the same period in 2018 and was primarily the net effect of:

Comparable earnings per common share for the three months ended March 31, 2019 also reflects the dilutive impact of common shares issued under our DRP in 2018 and 2019 and our Corporate ATM program in 2018.